THE POWER OF THE STATE

I used to make water on ships. Making it varied between easy and impossible. If anyone knows just exactly how a Douglass Aircraft Corp. evaporator works on engine waste heat please share it with me here. We could not figure it out and some of the smartest people I know had a lash at figuring it out. We reached the point of maximum frustration and just shoved a potable water hose into the damned thing and filled it with fresh water and still nothing came out and no, we were smarter than that. There were no mystery check valves preventing the flow and every valve had been replaced with brand new valves and still we never got a drop of water out it. Frustrating since it was 50% of the water distilling capability of the ship which otherwise was forced to depend on the Badger Vapor Compressor and a single easily clogged sea intake.

So, when I came home to California in 88 and found they'd banned real shower nozzles for spray mysters in a lame ass useless attempt to save water until they found they needed to tax people more, I looked in vain for something like this shower nozzle. Nowadays we get choice. The ad actually describes it accurately but allows as how flow restrictors are easily removable. Used to be one had to go to Urban Ore or House Salvage places to find real shower heads and that's what we did until some people figured out that all they had to do was sell shower nozzles that met the stupid code and if they included instructions for how to get rid of the crap and make it work properly, that is no crime.

I'm sure it will be. 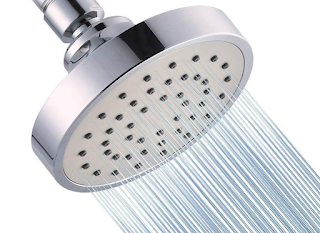