I was amused by the trade in insults initiated by Speaker Pelosi. She really does think she is Speaker to Animals and she showed her contempt write away (yeah, I know) by telling the President that it was too dangerous for him to address her little lions den of outrage and vd and sex perverts and well, the list is endless. He, she said, needed to put off an oral State of the Union to Congress and maybe he could write a letter instead. She thought she was dealing with a Bush and the muffins they surrounded themselves with for staff. 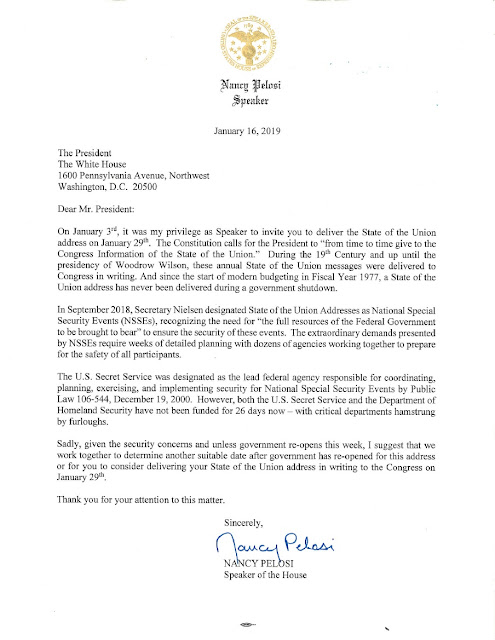 There is nothing wrong about her letter and if you read the articles of the actual Constitution it was about all that was ever expected of the President. You know, just send a letter once a year telling us how you see our nation our shared patrimony doing. You could think, no harm, no foul. You'd be a Bush if you did.

I savored his reply 24 hours later. Also a letter. I wonder if they use stamps. I understand the price has gone up again. 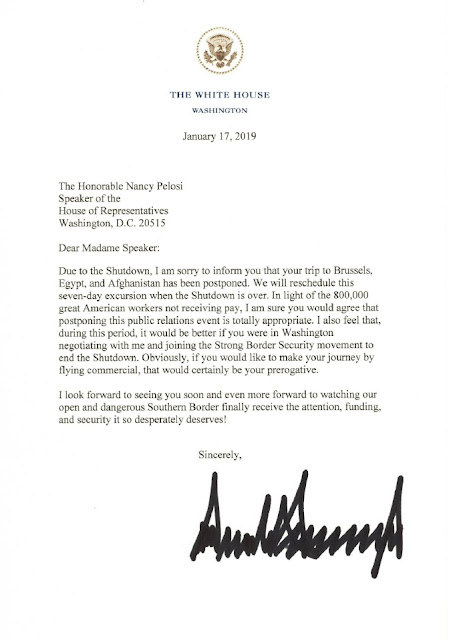 I suspect Pelosi is about to find out that President Trump doesn't fuck around. Her free trips back to her California home on USAF special mission jets probably expired at the same time. It was struggle she won against the Bush squishes in 2007 but I think if she wants/expects/needs a military plane to fly her home for free every weekend all that will be available will be clapped out old P-3 propeller driven maritime patrol planes.

Having driven a spike into government relations almost exactly as misplaced and stupid as Senator Reid using his power to end the 60 vote requirement for federal judges, Pelosi just hammered home a new idiocy that all of the House of Representatives will be forced to live with for decades.