After the neighborhood suddenly popped up with 88 million Killary campaign signs I decided it was time for me to mobilize the rich and ugly and I came up with a campaign sign of my own. It looks a lot like this. 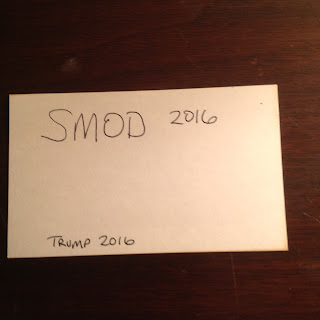 Yes yes, I know, my neighbors are going to burn down the house but I'm pretty sure we can take 'em. As you can see, there's plenty of room on that 3"x5" card for some more campaigning. I might squeeze in a little comment about how disgruntled I am at Obamacare.

The funny bit is how huge the size of his little campaign blits are compared to the half dozen losers that come out to Hillary's. I don't know what state is always the one but I suspect that Trump's going to get 49 states come the election. I won't know. I will be on the high seas on the Queen Mary II on my way to England. But, there, in my front yard, in the elfin garden to be, is the only Trump  election sign in MetroParkCentralis.
Posted by HMS Defiant at 12:54 AM
Labels: America