I never fail to visit Fort Myer when I visit the place I used to know as home. It's about 40 years now.
Like all the places I lived I know it like the back of my hand. That's a cue. It's actually a euphemism for people who know precisely where they are but could not, with a gun to their head, tell you the names of the streets that lead you there. You know. It's one block up, turn right, take the second left, and then turn right at the light.

In my last 5 visits  I never noticed a single solitary women at Fort Myer wearing a uniform. Girls in uniform are like crack. Guys have to look and then do the classic double take. The soldiers wore the uniform, the caissons were loaded, the horses were groomed right there by the post office and I drove down every single road because I had to, they're aren't so many roads and I never saw a single solitary woman wearing the uniform of the the Old Guard. Not one. 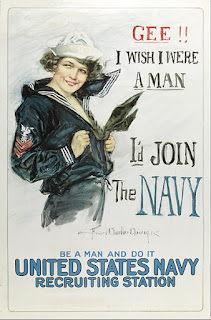 The last time I was there I was picking up a girl and ruthlessly tossing her over my shoulder into one of the drowning pools and tossing a little shark after her for good measure since I didn't have any piranha.  If you come in the Wright gate through Rosslyln by the Carillion you cannot help but notice the Old Guard. They're everywhere. Not a single one of them was a woman.

This was an observer's report. It puts me in mind of the Failaka Field Force where the CSO was very specific as I was building it to say, "no girls."  This was 1994 and we had finally wrapped our heads around letting girls come and play.

I was but a wee LT at the time but I thought we had girls in the navy for strength or something. God, that one Boatswain's Mate on the tug that hauled us in to refuel in Alameda. She had strength, coffee and a cig.

I sent all the dangerous stuff by sea and rolled with the land convoy through the Kingdom and spent many happy hours at one end of the causeway explaining that yes we had no guns and then another happy 5 hours at the northern end of the country explaining that most of all, what I wanted, was to get out.

As a glutton for punishment, I went back, again and again. Not going back again. I don't care where you go, Mecca, Medina, Jeddah, Riyahd, Khobar, Ras Jubayl, Dammam, Dahran. You don't want to be there. We were stupid enough, once, to send a submarine to Jeddah where the little Marine Colonel was tackled by 3 Saudi frontier police for being so bold as to take a picture of the berth assigned for the submarine in his duties as force protection officer for the Middle East. Me and the SEAL had a little laugh about that until the admiral decided that in the future we would accompany the little Marine. There really wasn't all that much to laugh at after Khoboar. Still, I managed. Lucky Base was just the other side of the road from Khobar and they had machine guns with overwatch and knew a thing or two about actual perimeter security. All Khobar knew was how to run an Air Force Exchange. The difference between the Air Force and the Army used to be breathtaking.

That's a disservice to the Air Force. Khobar was devestated by a bomb truck that blew up outside the base perimeter. I don't recall if it tried to make it's way by the guards. It could have. We don't actually pretend to that level of protection but we had it in Iraq where Marines died when they used fully automatic weapons to try to stop truck bombers intent on blowing up the base and where, in Beirut, they seem to have tried. One has to keep all the bomb trucks away and there is smooth driving over the desert when one feels the need for Paradise. Both the Saudis and the Kuwaitis left the crash debris from driving 'accident's' right there by the road as a warning and a lesson to their junior subjects.

I don't like the FAST, a lot. They are the worst assholes on earth except SUBGROUP 9 who are the worst. After Khobar we brought the FAST out of Diego Garcia and they executed. They did about 90% crap but they knew how to set up an access point. To get on ASU you needed to cross the perimiter and about a hundred yards away they had a machine gun overwatch built out of 63L pallets and sand bags with gunners who really really thirsted to kill and open fire. They didn't have a real machine gun but I'm pretty sure that unlike Navy M60's, their's would successfully imitate a real machine gun when they opened fire.

Admittedly, they still used very careful mirror scanning to verify that the tanker trucks coming onto the base did not have readily detectictible to imbeciles bombs strapped to the underside by guards who were 'trained' to inspect the vehicle's bottom but not to even think of wondering about 70,000 pounds of explosive inside the tanker.

Even if you had it all greased and good there is alway Petty Officer Cole to goon it up.
Posted by HMS Defiant at 1:00 AM