I knew that Newsweek was sold to some rich sucker several years ago for 1 dollar. I thought that it had gone under since I don't have California supermarkets to wade through anymore and the checkout lineS at the placeS I shop for groceries are blessedly free of copies of People, National Enquirer and Newsweek. Thank God it is also usually free of those little 8 packs of delicious crumb donuts which I love. I was really surprised to see this little add in an online article I read last night. 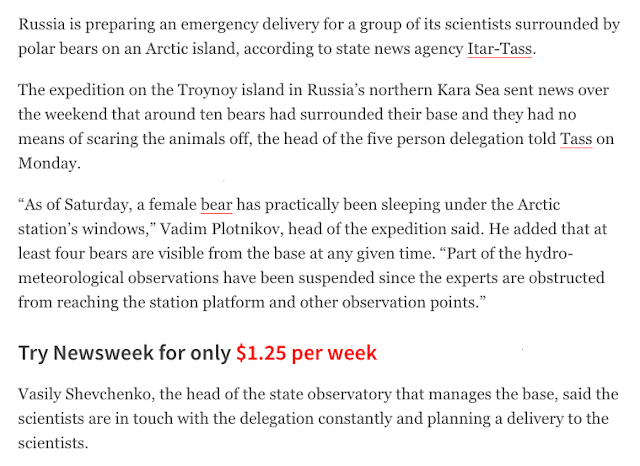 Imagine the hubris of a magazine asking people to pay more each week for a copy of the worthless magazine than what the entire thing fetched when it was sold for a single dollar to a sucker investor. I might pay all of a whole dollar for a lifetime subscription for Newsweek but then, I'd never read the damned things and they'd just pile up and have to be taken out to the trash, so no.

I find the article itself somewhat bizarre too. Let's be honest. When the Russians were ever bothered by some living thing, they took pains to thoroughly kill it. They probably air dropped an AK-47 and a thousand rounds of ammo.....or a couple dozen vials of sarin gas. Russians have a hasty way of responding to threats.

Russians also have long memories. I'm kind of surprised by the outpouring of news stories discussing how Putin and the dictator of Turkey are turning into good buddies. Erdogan screwed up and if he now thinks Putin is friendly and decides that it's in his best interest to snuggle up to Russia, I have news for him. Russian autocrats only did that good pal/folksy thing to lure their enemies into knife range. Putin won't hesistate to order a decapitation strike on a non-nuclear power and his little Black Sea Fleet of ships and submarines has shown just how lethal a lilliputian vessel can be. (not ours of course, our's are quite worthless.)

Posted by HMS Defiant at 2:20 AM
Labels: contempt, fail, Truth