As I saw this cartoon yesterday I wondered why it resonated as it did in my mind. Today I remember. 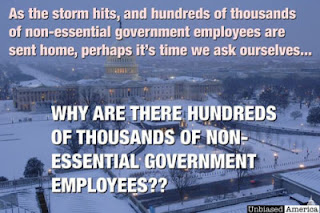 The year was 2001 and it was the day after the attack on 9/11 when someone moved through my command and handed a very select few a sticker for their employee badges that stated that they were essential personnel. These were the elite who could be admitted in the event of a potential catastrophe. I was not one of the select few, which mattered to me not a jot.

A couple of days later an institution at SPAWAR that had long ago ended any useful legitimate purpose was reborn and the Y2K War Room was resurrected as the SPAWARSYSCOM Command Center and your humble scribe was duly hunted down by the elite and made one of the two SPAWARSYSCOM Command Duty Officers. It would be my humble task to do many horrible things to people from 2300 until 0800 every night from now until the end of the War on Terror.

Naturally, this was not punishment enough. I reported for my first night of duty without bothering to go home and even worked in my own space for awhile the next morning before heading home to Solana Beach where I lived. Late that night your happy, go-lucky scribe attempted to report for the midwatch and presented himself at the main/only open gate to the Old Town Campus where I was barred from entry by the guards because, wait for it..... I did not have a little sticker on my badge that declared me to be "essential."

I'm pretty sure that if I'd been in my right mind and thought it important to pay attention to stupid things like that I would simply have nodded my head in agreement, turned my car around and headed to the bars in Del Mar home to bed. 'That's what they want, that's what they get.' Of course, all my life, after making it a habit to learn the rules, I rarely ever played by them. Besides, I was supposed to be an adult now and wasn't I one of perhaps six people working at Old Town Campus wearing one of these things above my right pocket? I was. 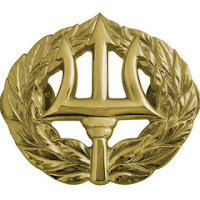 The guards and I discussed it and we all decided that, just for a little while, I could be essential too.
Posted by HMS Defiant at 4:23 PM
Labels: Sea Stories, USN, war