One of the good guys in N7 came up with this design as Naval Coastal Warfare Forces were getting renamed and reorganized by Navy Expeditionary Combat Command. I laughed and told Eric it would never fly even though it pretty much captured the sentiments of all the people there at the time. I can only wonder at what changed when they were merged with Riverine Group ONE a couple of years after I left. The design seems so inappropriate now. It's broken. 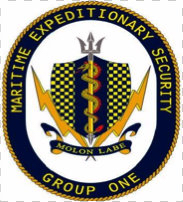 I'm sure Eric is even more unhappy about the recent events involving Group ONE than I am.
Posted by HMS Defiant at 4:17 AM
Labels: Collapse, integrity, Sea Stories, USN