I open the computer to this, a picture I took when we went to a nice place. It's the ship of fools. There were so many. Every day I can hear them grousing about what a crap day it is, no water, nothing to w
well, you know. A sailor born almost a thousand years ago griping. I put some of those days behind me about 10 years ago now. I'm thinking of taking them up again. This was at Point Loma. 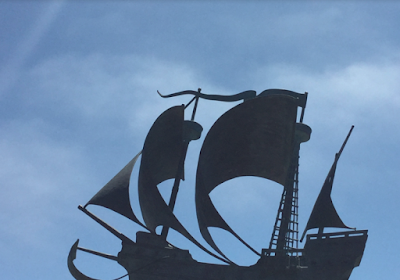 I'll have to fix the lights though. Damn the lights.

UPDATE: Those were the Caravels, the ships of exploration for a hundred years. The wonder wasn't so much that they made it to the new world or India, it was that they made it back for however well they were outfitted at the outset in Lisbon and elsewhere, they had to resupply to return and they were tiny ships with men of voracious appetites and a terrible thirst. I don't actually think whining was allowed. Me? I merely have to delve into the electronics of my trunk to find out why the lights work so well when they're braced in the trunk and not at all when they're braced on the aft end of my boat trailer.
Posted by HMS Defiant at 3:00 AM