Given the huge outrage going on because people demanding justice are not getting arrested, tried or imprisoned for arson, assault on a policeman, vandalism, littering, or playing in the street, I've decided to check up on some of the old classics so I'm going to read some Mark Twain. I think I'll start with this one and work my way through Captain Stormfield's visit to heaven. I think I had read all of them by the time I left 8th grade except for The Gilded Age which I read on an LCU off the beach at Camp Pendleton where it spent 4 days bobbing around doing ASW the hard way. 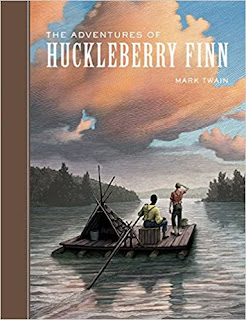 I can't read or recall the word 'Huckleberry' without it bringing up the memory of MM3 Huckleberry. He worked in my Division on LaSalle which meant that he was a solid member of the Auxiliaries Division and mostly worked on HVAC and reefers and a thousand other things but he was unusual in many respects; the most notable of them being that he stood topwatch in the after machinery space. Up forward in an otherwise identical machinery room was the starboard boiler, the starboard engines, the starboard Evaporator and the starboard shaft plus the switchboards and ship's service turbine generators. Up forward for some reason were the Engineering Officer of the Watch - usually one of the chiefs or engineering department officers and the top watches who were usually first class petty officers. Huckleberry was their peer from a bulkhead away and about a decade of service. In other words, he ran the after space without being under the direct visual supervision of the EOOW. He was about 23 years old.

My first division was probably the best group of people I served with on the ships. The ones who weren't experts in their field learned at the hands of the masters and the experts were delighted to teach the younger guys the ins and outs of everything from being a master machinist to diesel mechanic and air conditioning repair, hydraulic systems and everything in between. In 12 months forward deployed there were no real incidents, no personnel casualties, no horror stories beyong the ones I like to tell and it was an altogether amazing experience.

Huckleberry stood out even in that crew.
Posted by HMS Defiant at 3:52 PM