There are a number of signs that are showing that the path to hell is really paved with the best of intentions. I see it everyday as I watch the vandals uproot and discard history in the name of so-called justice and in support of rapists, murderers and idiots. I'm not sure I like where the country is headed but so heads the world and it will be an interesting ride as they suck the life out of every institution created, nurtured and brought into being by white men of good will.

The list is now effectively endless and there doesn't appear to be any natural stop to the increase in pointless destruction and violence and even when the schools were open they were no barrier to the rapid spread of idiocy, hate and intolerance. In fact, they were behind the hatred, the intolerance and the imbecility of our school age prima donnas who think they have the secret knowledge that lets them screw over history and the people who really made it as opposed to those who think they did. I have news folks. It wasn't the slaves. It wasn't the natives. It never was. We're here now, where we are because of one thing only; the Industrial Revolution which happened in Great Britain.

I saw the reference pictured earlier today at the proper VOX and it resonated with me. I could see the merger of boys and girls into a scouting program and I even took part wholeheartedly in it as a teenager and never thought twice about it except of course that there were girls and mothers involved again in what had been a boys only activity after passing out of cub scouts. The Boy Scouts were a fairly worthwhile activity and mostly harmless until they allowed everything about the Boy Scouts to be corrupted and turned it into a secular version of the Catholic Church that permitted and allowed all kinds of forbidden explorations and shed any resemblance to the ideals embodied in the Scout Oath and Motto.

I don't think the first flight of 3 nephews partook of scouting at all. The next flight of 3 all went through the boys only program and each was an Eagle Scout when they ended it by graduating and going to college. The final flight of 2 didn't have anything to do with Scouting that I heard of and of course the final flight is a girl and to be honest I'm not sure if she did any scouting. I'd be very surprised to learn otherwise.

Here's a picture from the Scouts Executive Branch, such as they are, and they have the last word on this in so far as I'm concerned. It's at the bottom in red. 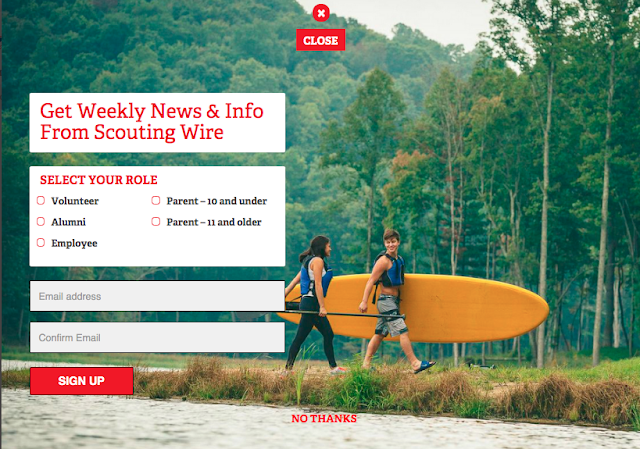 You know I cannot leave them with the last word. An organization like Scouting used to be dedicated to the proposition of turning boys into men. They stood FOR something as opposed to modern Scouting and all the other violent mobs who stand for nothing at all except when they climb to their feet to tear down and destroy because they are only united by opposition and sadly they're all opposed by nobody at all. Where have you seen anybody marching in support of All Lives Matter? Where are the White Supremacists who are secretly running all things?
Posted by HMS Defiant at 4:38 PM