I DID IT AND I'M SORRY ALREADY

It was me. I was an LCDR on the NAVCENT staff in Bahrain and I'm the one that broke the uniform code. It was me. I'm sorry. I shared an office with the staff SEAL, the staff EOD and the other MCM guy, a captain. He was way senior to us but a good guy and someone I knew from the Mobile Units. He was in fact, the CO of the little bunch of us that were the Failaka Field Force back in the day, after Desert Storm. He replaced Captain Tom Fridgeon who was also a very good man and first leader of the plucky MCMs sent to serve forever in Bahrain.

But, as I said. I'm the guy. We cats and dogs (SEALS, EOD and Me) had our own trailer next to the Marine's and down the walk from the MET guys in their trailer. We weren't quite as upscale and near to the throne as the Flag Commander whose trailer was closest to the throne. I was a mobile unit of one. I was titled N361 working with N36 and sharing an office with N37 but unlike them I had one full set of mobile unit equipment in the Banz Warehouse and it needed to be cycled and started if it was to work when called upon. I had no minions so it was up to me to start the generators and run them and then start and drive the 5 tons and deuce and a halfs around the Banz every week and because it could be dirty work, I wore my desert camouflage uniform.

I just wanna say, at least I had an excuse to wear the lightweight breathable suitable for desert climates uniform. I was almost a maintenance tech. So there I am, staff LCDR at NAVCENT HQ wearing the desert khami and before you know it everybody else on the staff, except the N6 bunch, was wearing it too. Even the admiral broke down and wore it.

Still and all, there's no excuse for this guy. You are a chair commando and you need to dress for it. Nobody with a Pentagon office and official car and driver should wear that uniform. 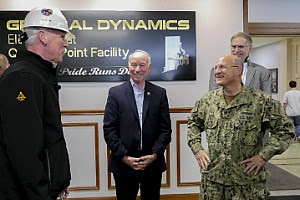