The people named should be indicted for crimes, they should be tried and then they should be shot. Why fool around with jail? These people were running a coup and they got caught. To quote the Vogon captain, death's too good for them. 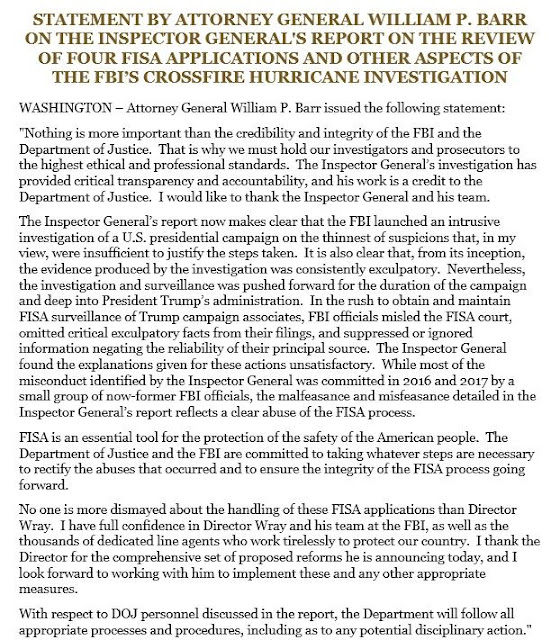 Nothing is ever final in Washington....

All’s well that ends well. Even James Comey was happy, dashing off an oped in the Washington Post touting his and the organization’s vindication.

Except, within hours of the release of the report, along comes U.S. Attorney John Durham—who has been investigating much of the same territory but with a wider berth and prosecutorial powers— to spoil the occasion:

“Based on the evidence collected to date, and while our investigation is ongoing, last month we advised the Inspector General that we do not agree with some of the report’s conclusions as to predication and how the FBI case was opened,”

Predication is, of course, the heart of the matter. Just why did the FBI open an investigation of Trump-Russia collusion that proved, after nearly two years, to be non-existent? Was there real justification somewhere, no matter how obscure, as the IG suggests, or was it a set-up, as implied in Lee Smith’s recent “The Plot Against the President”?