Ruthlessly stolen root, stock and branch from the Bayou Renaissance Man. It keeps going unsaid by the media, but the US Courts have ruled over and over again that the police have no duty to protect you. None at all. Not even those shits in Broward were held accountable for their manifest failures to do what liberals all expect of them and that realists know just don't happen all that often when left purely in the hands of the police. Oh, and the cops can justifiably shoot innocent people until they get tired and go home and neither you nor the law can hold them accountable in most jurisdictions because they all agree that the only thing that matters is going home at the end of their shift. 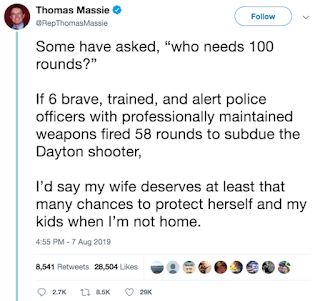 I did peruse an article today that claimed that magazine springs can safely be counted  on to work until after the ammunition in the magazine has deteriorated to the point of uselessness. I'm not sure I believe that.
Posted by HMS Defiant at 6:30 AM