IF YOU WONDER WHY THE HATRED

I listened to a local talk radio host rant for the entire trip home about how the civilian bystanders in the vicinity of yesterday's shootout in Philadelphia pelted the police with garbage and other things even as the cops were getting shot at. The talk radio guy must have spittle of rage flying out of his mouth as he described how the Philadelphians were treating the police in the assault. He sounded ignorant of life in Philadelphia so a little lesson from the memory hole.

You can read the details of the 1985 Philly police assault on the Africa house here. The upshot is that the cops decided to collude with the FBI to drop a bomb on the house they were assaulting and the fire spread out of control as the police told the firemen to let it burn. This is what it looked like when it was over. 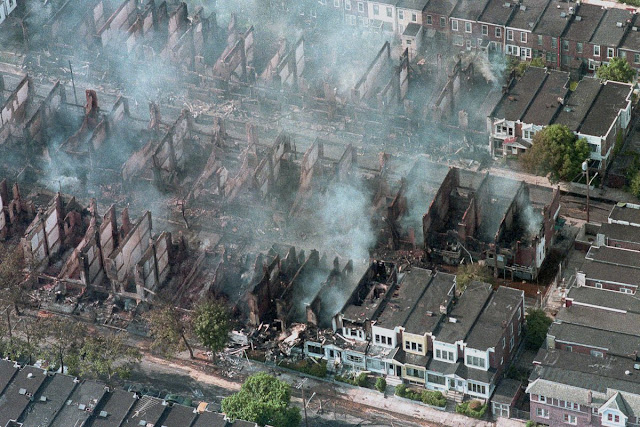 The final score by the time it was extinguished four hours later, 61 houses had been burned to the gound. Apart from a woman and 13-year-old boy who escaped when the fire started, everyone in the MOVE house was dead. The 11 deaths included MOVE founder John Africa, five adults and five children between the ages of seven and 13. Despite investigations and formal apologies, neither the mayor, nor the police commissioner, nor anyone else from the city was criminally charged.

There's a reason why the natives are restless when the police come calling and start calling in tactical forces and applying military assault tactics to police matters. In their experience the cure is far worse than the disease. They're wrong but ignorant and don't know that the police are just there to help them.
Posted by HMS Defiant at 10:35 AM