STILL BROKEN AFTER ALL THESE YEARS

ProPublica published an interesting item that was almost about current US mine countermeasures based out of Bahrain. They've been there since 1996 and as you might imagine they're getting a little long in the tooth. As warships they're just about senescent and I find it hard to believe that what was broken when they arrived there in 1996 and was still broken years later and then was joined by many other things that broke, ever got repaired. 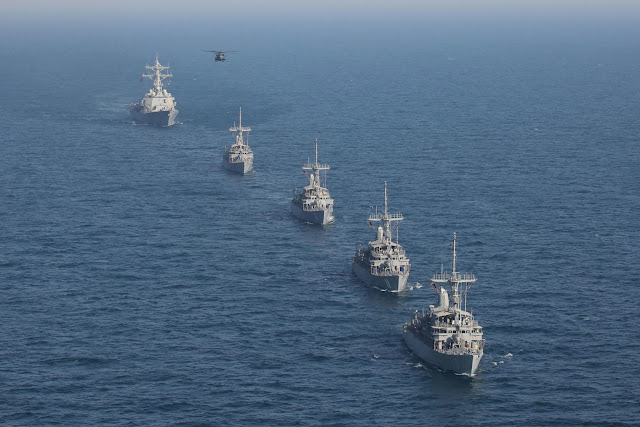 I played the mine countermeasures game in the Gulf shortly before the new team showed up. We did it in ships a little older and yet we seldom had any problem getting underway and our sonars worked perfectly except for one ship whose sonar fell off and dropped to the bottom of the Persian Gulf. If you read the article linked at Pro Publica it sounds like things are considerably more dismal now. I'm not surprised. It's hard to instill pride and ownership in a ship and its material condition when the crews rotate on and off every 6 months or so. OTOH, I heard that many years ago they made the ships PCS moves and the sailors were allowed to take their families to Bahrain and thus stay on the ship for 1 or 2 years at a time. It's been awhile and I don't know if that's still the case. They keep evacuating families when terrorism peaks in the Middle East.

One of my collateral duties on the NAVCENT/5TH Fleet staff was Salvage Officer. I found it impossible to task either of the 2 MCM ships to help me find things that fell off other ships using their high definition sonars. Either the ship was crippled and couldn't get underway or the logic prevented them from putting the sonar dome in the water. For about 8 months I found them to be perfectly useless. The older ships, the MSOs that were all scrapped 3 years earlier wouldn't have any trouble finding the rudders that fell off FFGs or antennae that blew overboard or F-14s that crashed after take off or helos that fell out of the sky but the Ardent and Dextrous were not up to the task back then. It doesn't sound like things have improved since 1997.

That is really too bad. These are simple ships and they have just one purpose. They can find and destroy mines. That's about it. They can sweep them with mechanical, acoustic or electrical sweep gear or hunt the mines with a variable depth sonar (a way safer way to clear mines). And yet it appears that they can't.

The MCM class of mine sweepers was meant to be replaced a decade ago by the Little Crappy Ship with the MCM module that would take a perfectly worthless surface combatant and turn it into a mine sweeper simply by dropping a module on it and of course there is no specialized training required to operate high definition sonar, remote operated vehicles, or drive into and through mine danger areas.

I can hear various old salts laughing. I shall tell you how it was when I did it. The Mine Group up in Seattle swept up the various bodies that could still fog a mirror, hear thunder and see lightning and put them all on a plane, flew them to Bahrain and put them on the new, almost completely unfamiliar ship and told them they had 2 days to turn over with the outgoing crews because they had to be on the USAF rotator heading back to CONUS. In 2 days we were all "experts."

Still, we did better then the next time when the MSOs and one MCM deployed for Desert Storm. We only had one warship stagger into a minefield and sweep a mine the hard way. In Desert Storm we had two ships stagger into minefields and sweep mines the hard way. I found the Samuel B. Roberts mine strike quite interesting but more so was USS Tripoli. It blew a hole 30 feet across in the hull of that giant ship. My little MSO was only 35 feet across at it's widest point. 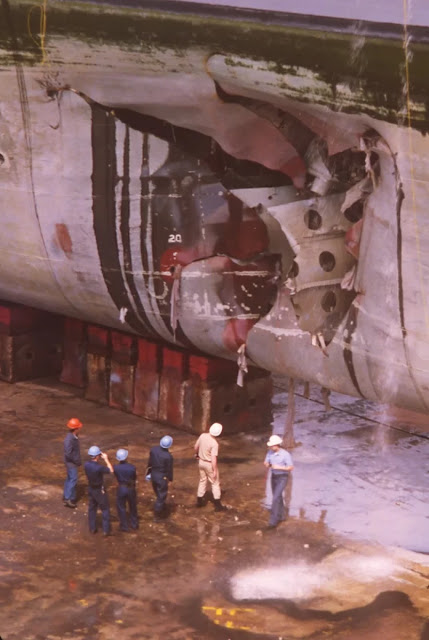 I suppose they got lucky it didn't strike directly on the keel. That would have put paid to the ship that was long known as the Cripoli for it's engineering plant's refusal to come back to life whenever it came within visual signaling range to Grande Island in Subic Bay.

Me? I wonder if the VADM out there and those at home here have considered the sheer stupidity of keeping a Battle Group inside the Persian Gulf. We used to conduct damage control drills with a hit alfa and hit bravo which were usually missile strikes on our hull. We then trained to put out the fires, stop the flooding and restore the equipment to get underway and continue the fight. All those guys that bleat about 'stealth' never tell you that radars emit energy that pinpoints precisely where a ship is and the Iranians have about 15,000 anti-ship missiles that can hit any target in the Gulf from their truck/shore based launchers up and down the coast from Bandar Abbas and Abu Musa to Bushehr. If they launch flocks of missiles at certain USN ships it won't be hits Alfa and Bravo, it will be hit Zulu that sweeps the USN from the Gulf.

They better hustle out and stand by in the Indian Ocean and North Arabian Sea like they did for Praying Mantis. The C801 and C802 missiles were pretty damned devastating looking 20 years ago. I have no idea what they have now.
Posted by HMS Defiant at 3:26 AM