I had a 50% role in the design of these challenge coins. The admirals in NOLA were terrified of the commodore we had in mind when we made them. He was shaking the very foundations of the earth they stood on and 100% of what he predicted in his article in the Proceedings of the Naval Institute did indeed come to pass and all the scuzzy slime that had carefully created their own little empire down in New Orleans were turfed out, displaced and thrown away shortly after 9/11. 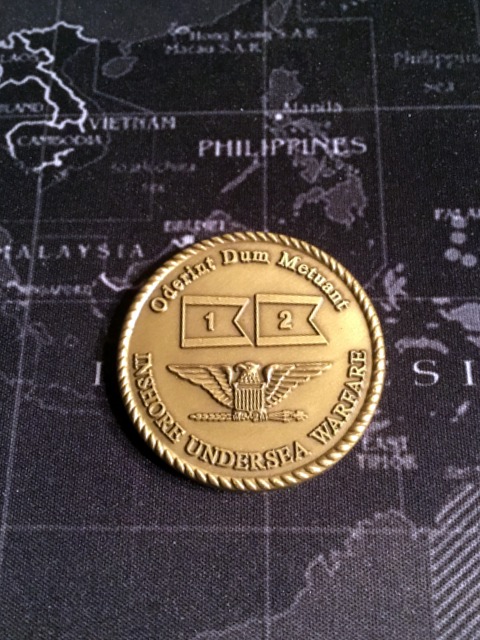 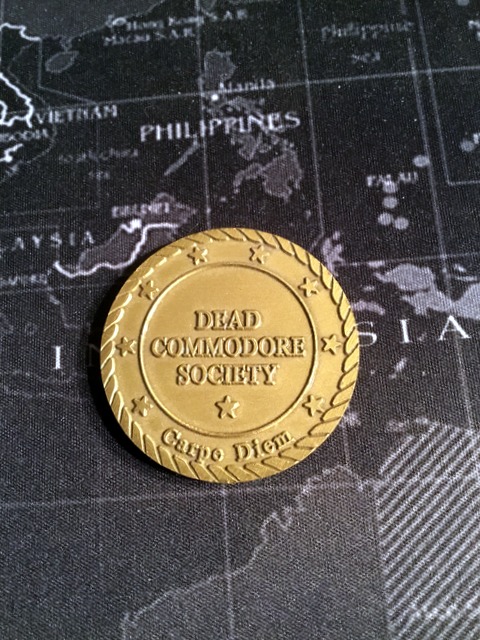 There were only a handful ever made and they went to the ones who know what we meant at the time, (long ago in the last millennium). The other guy who was responsible for the other 50% of the design was a captain and then was promoted and promoted and retired as a 2 star but while he served very well as a Squadron Commodore, he was nought but a Deputy Commodore of the Group. When we designed these together in Korea and had them made, there were only 2 commodores of IUW; one East Coast and one West Coast. The Commodores on the west coast were always some of the finest officers we had.

At the time we had the coins made we worked for one of the best Commodores Inshore Undersea Warfare ever had but he disdained the people in his Administrative Chain of Command and let it show. He, on the other hand, was great to work for. We decided that we'd honor him with a coin at his change of command and retirement ceremony and since we happened to be in Korea at the time it was very simple and cheap to create some coins there and have them within a couple of weeks.

They signify something the Philadelphia police and all to many other institutions have lost over the last 30 years as every institution crumbled under the idiotic demands of BLM, LGBT dogma, Title IX at universities and their kangaroo courts, the destruction of 100% of the integrity of the FBI, CIA, DNI, NSA, the church and the DOJ. I happen to believe you could toss the entire democratic party in the rubbish bin alongside all of the above because, say what you will, the last one of them who really got it was LBJ and he's been dead and buried for decades.

Nowadays the dregs of society claim to lead everything and they exert control over the institutions far beyond their competence or ability. The people hate them but nobody fears them. To quote the famous Spanish Inquisition.


At one time, they were feared and rightly so but we've reached the point where SJWs and their fellow travelers have decoupled all the teeth and fangs of almost all accusatory language from fear because they over-used them to death. Everyone that disagrees is not a nazi or racist or white supremacist and they no longer care at all what the snowflakes think.

The Philly cops and the so called justice types that let the perps of the Move bombing get away with it are all too similar to the ones that let cops get away with killing anybody at all and now the cops and the law types have zero credibility and no respect from an enormous percentage of the people. Having the courts all the way up to the Supreme Court declare again and again that the police "have no duty to protect" while the politicians seek to disarm us all...well, they lost the last bastion of credibility.

I think we're ready to let them fear the people now until they take positive steps to rebuild what they so carelessly allowed the scum at the top throw away over the last 30 years.
Posted by HMS Defiant at 4:32 PM