I had hoped, 30 years ago, that David Palmer would write more. Sadly, he didn't. Tracking was his last work and that was decades ago.

I was denied the opportunity to try to turn my little girl into a serious menace but I strongly suspect her mother has taken care of that. Not my kind of menace, it goes without saying. I would have taught her how to sail, build a campfire, shoot, replace a tire on a car and many of those sorts of things girls should know.

I've used the picture a time or two here but one more won't hurt. If you find the book and hate it to death, please don't share it with me. A young woman, striding confidently into the future was all I hoped for when my daughter was born. She might make it still. 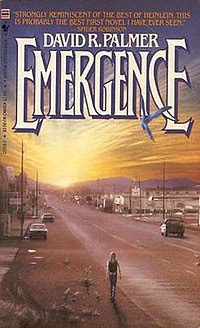 Mr. Palmer
has a way with words.


Preflighting the plane, including draining the fuel sumps, took a little longer. But during flight training, not departing with water in the fuel had been the subject of so much discussion, delivered with such frequency and intensity, that by now I could probably eat a bacon cheeseburger while scrubbing the temple floor bareheaded on the Sabbath with less personal distress than not verifying that the fuel was water-free before a flight.

Back when I used to fly I was most careful about getting the water out of my fuel. Later, as CHENG I was most careful to not to have that crap in my fuel. When my ENC came up to see me on the bridge, one beautiful day in the Santa Barbara ship chanel, southbound to our homeport in San Diego after our epic voyage to San Francisco, he took me out back where the captain couldn't see or hear us and he was sweating as he told me all he was getting out of our last fuel tank was water. We still had a couple hundred miles to go at that point. Things were not looking shiny.

I still remember doing a hotrefuel on the Desert Duck. It settled onto the flight deck as helicopters do and one of their aviation bosun's mates took to the cockpit a sample glass of JP-5 and held it up so the pilot could see what color his fuel was. It was as clear as water. It looked like water. This was back when nobody cared if we stripped the fuel tanks daily. There was seldom any water or sediment in our fuel samples.

Back in 1984, a pilot and only a pilot was the sole apostle of true fuel. This pilot shut his helicopter down. A hot refuel was no longer going to happen because one look at that sample of fuel convinced him it was water. What we had was some JP-5 of unusal clarity and without a tinge of color.

I was a little surprised he didn't insist on a Pensky Martens test.

I did it a few years later when a fuel barge came alongside at Sitrah to fill my tanks. I took a look at the offered fuel before I let it flow and said, no and we'll test it. What happens when one puts gasoline into diesel engines results in a diesel engine explosion and finding bits of your former engine buried in the wooden hull, if you're lucky. My counterpart on the other ship at anchor that took that fuel found that out the hard way when his generator blew to bits in the forward engine room. He was lucky nobody was killed. He still had his primary generator blow up and wouldn't be sweeping mines again for some time.

The nice thing about Cessnas, as I recall, is that you can sample the fuel in the wings just by pushing the sampler into the tank on the bottom of the wing. Water has a higher specific gravity than fuel and will be the first thing to flow out. Now that I think about it, I only ever flew Cessnas.
Posted by HMS Defiant at 6:30 AM