FIRING UP ANTI-FA AND BLM

It seems that the resistance is allowed to toss around fire bombs with impunity. I can't recall anyone throwing one at a riot and later being hauled before the bar of justice. Admittedly, these fascists are so blooming incompetent their aim is always off, they have twig-like arms and throw like girls but still, fire bombs!

If it is not proscribed or cracked down on by the cops, can we throw fire bombs at anti-fa and BLM? I mean, it's only fair isn't it? 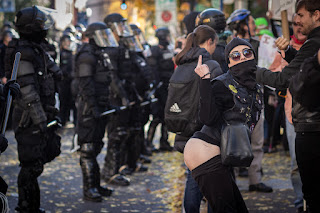 And besides, it's not like anybody cares what happens to a bunch of black clad fascists rioting in the streets. It is just possible that they comprehend this but then, they don't score all that high on comprehension, civilization or public decorum. Maybe we could just send them all to Cuba or Venezuela for a couple of years of finishing before letting them back on the streets in America. I'm sure they'd agree since those are well known socialist paradises. It could be like 2 years at Club Med for them.

Is Club Med still around or is that one with history?
Posted by HMS Defiant at 2:49 PM