THE FALL OF THE HOUSE OF SAUD

Many Americans rejoice at what they perceive as a liberal wave sweeping over the Arabian Peninsula and are glad to see that once again Saudis can go to movies and women can drive cars and that the new Crown Prince seems to be open to liberal and progressive thoughts that first swept the world 200 years ago. I'm not so sanguine. This same sort of liberal outbreak occured once before in another Kingdom bordering the Persian Gulf and it did not end well for the people, the ruling elite or the country. You can read about it in Paved With Good Intentions by Barry Rubin

It looks like the Crown Prince has disciplined the House of Saud but I don't really see any sign that he has revoked the powers of the Mutawa or in any way, shape or form reduced the militant demands of the most militant and intolerant religion on the planet. He has, perhaps, won the war over family but it is not yet seen that he has even engaged in the war with the mullahs and unlike the West, religion is the ONLY thing that matters in the Kingdom.

The Crown Prince has acted as the bottom has fallen out of the petroleum industry and reduced OPEC to a floundering helpless wreck of its former self. The floor price for a barrel of oil needed to keep the Kingdom solvent is history and won't be seen again for decades, if ever. Even as he brings the family to heel and starts to round up the money he is faced with external revolt and war in Yemen and external rebellion and war in Syria and a grasping Egypt who needs billions of Saudi petrodollars in subsidies every year to feed its massive population. It doesn't look good now and that doesn't count what happens when his shiites go up in flames next year and lay waste to the oil producing parts of Saudi Arabia.

While some are getting optimistic about Arabia I sense doom closing in. Their repeated and failed efforts to put Saudis to work in the workforce have largely been in vain for nothing. They do not produce anything and if they did they couldn't compete with the rest of the world. 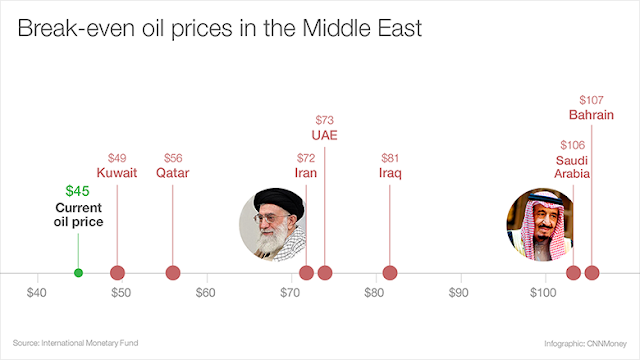