It was called to my attention by the person who didn't swim 142 laps yesterday and who can barely raise his arms. I have sore muscles on muscles I never had before.

I think I'll add Ace of Spades to my blogroll since he writes things perfectly and gets all the important stories I otherwise miss since we don't watch the news and if it's not in the Wall Street Journal we are both prepared to never hear it.

I greatly like the story in the Orange County Register. They were one county north of the good county and well south of the hellholes created by democrats along the coast. Every ten years or so, in my experience the county is just barking mad and so it appears again today where they told California kleptokrats and all the other NAZIs to just fuck off.


The Orange County Sheriff’s Department, whose leadership opposes the new California sanctuary law that limits cooperation with federal immigration officials, announced Monday that it is now providing public information on when inmates are released from custody.
As of Monday, March 26, an existing “Who’s in Jail” online database includes the date and time of inmates’ release – a move agency officials say will enhance communication with its law enforcement partners.

And then Ace had this guy who somehow manages to be both a very convincing NAZI and a Borg. 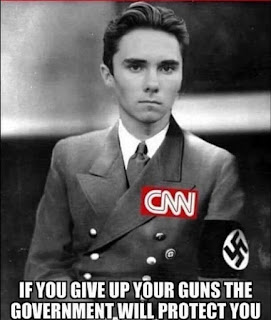 The first Captain I had in the Navy was a member of the Hitler Youth. He and his mother were on the last ship to leave Danzig before the Russians rolled over it. They were White Russians and I can practically here the voice, "so, if we're being attacked by commies and nazis, who do we shoot first? Slap, "business before pleasure! Shoot the German.
Posted by HMS Defiant at 10:47 PM