I believe in reading widely so I am linking a couple of articles from Arab News. The articles deal with the 1948 war from a unique perspective and also with the current flux of much of the Arab world as they scramble out of their own countries and seek refugee status elsewhere in the Arab world.

I honestly think you will find the links intersting and they are not very long articles.

From not quite one year ago today: arab spring and israeli enemy

From this week, a quick look at the real enemy: The Arabs

The author of these articles and a number of other fine articles is: Abdulateef Al-Mulhim.


Abdulateef Al-Mulhim writes essays and op-eds that appear in regularly in Arab News, the SUSRISblog and elsewhere. He is retired from the Royal Saudi Navy at the rank of Commodore.  Al-Mulhim served extensively in the United States, including attendance at the Maritime College of the State University of New York.  He is based in Alkhobar and can be contacted at: almulhimnavy@hotmail.com 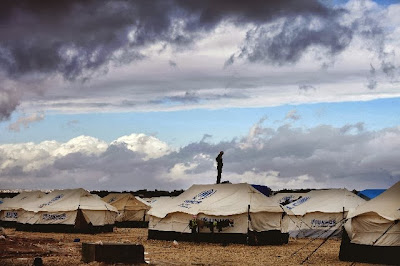 A single refugee camp of 160,000 in Jordan: A refugee camp for Syrians is now Jordan's 5th largest city
Posted by HMS Defiant at 4:30 AM