A few days hence will mark the anniversary of an amphibious invasion that was so epic in scale, planning and ferocity that it could not be repeated again today or even in 10 years. In its losses it rivaled the deaths and injuries of some of the smaller battles of the Great War.

The following is taken verbatim from the D Day Museum and Operation OVERLORD.

The Allied casualties figures for D-Day have generally been estimated at 10,000, including 2500 dead. Broken down by nationality, the usual D-Day casualty figures are approximately 2700 British, 946 Canadians, and 6603 Americans. However recent painstaking research by the US National D-Day Memorial Foundation has achieved a more accurate - and much higher - figure for the Allied personnel who were killed on D-Day. They have recorded the names of individual Allied personnel killed on 6 June 1944 in Operation Overlord, and so far they have verified 2499 American D-Day fatalities and 1915 from the other Allied nations, a total of 4414 dead (much higher than the traditional figure of 2500 dead). Further research may mean that these numbers will increase slightly in future. The details of this research will in due course be available on the Foundation's website at www.dday.org. This new research means that the casualty figures given for individual units in the next few paragraphs are no doubt inaccurate, and hopefully more accurate figures will one day be calculated.

Casualties on the British beaches were roughly 1000 on Gold Beach and the same number on Sword Beach. The remainder of the British losses were amongst the airborne troops: some 600 were killed or wounded, and 600 more were missing; 100 glider pilots also became casualties. The losses of 3rd Canadian Division at Juno Beach have been given as 340 killed, 574 wounded and 47 taken prisoner.
The breakdown of US casualties was 1465 dead, 3184 wounded, 1928 missing and 26 captured. Of the total US figure, 2499 casualties were from the US airborne troops (238 of them being deaths). The casualties at Utah Beach were relatively light: 197, including 60 missing. However, the US 1st and 29th Divisions together suffered around 2000 casualties at Omaha Beach.

The total German casualties on D-Day are not known, but are estimated as being between 4000 and 9000 men.

Naval losses for June 1944 included 24 warships and 35 merchantmen or auxiliaries sunk, and a further 120 vessels damaged.

Over 425,000 Allied and German troops were killed, wounded or went missing during the Battle of Normandy. This figure includes over 209,000 Allied casualties, with nearly 37,000 dead amongst the ground forces and a further 16,714 deaths amongst the Allied air forces. Of the Allied casualties, 83,045 were from 21st Army Group (British, Canadian and Polish ground forces), 125,847 from the US ground forces. The losses of the German forces during the Battle of Normandy can only be estimated. Roughly 200,000 German troops were killed or wounded. The Allies also captured 200,000 prisoners of war (not included in the 425,000 total, above). During the fighting around the Falaise Pocket (August 1944) alone, the Germans suffered losses of around 90,000, including prisoners." 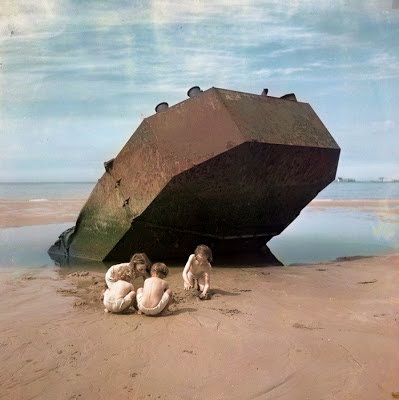 This photograph of children playing on Omaha Beach in 1947 is one of the many by Chim.

What remains is an entire continent of people that will not fight for anything. Just like their ancestors who survived the Great War they cannot conceive of anything  that is worth the cost of war and they have, one and all, decided to fight no more.

The 6th of June will mark the 69th anniversary of Overlord. Surely it is a comfort to know that no nation or coalition of nations on earth could execute anything at all like that again today. On the other hand, it does make one sorry for those that have fallen under the shadow of a great evil and cannot count on any hope of salvation from the West.
Posted by HMS Defiant at 6:55 AM