One of the issues I didn't discuss yesterday was what happens after even a simple Captain's Mast. All of those cases, probably a hundred or more, were settled to the mutual agreement of the command and the sailor. In other words, it was a fair cop. The accused did do the crime and did get caught. Nobody went to jail. On my third ship the command philosophy dictated that anybody found guilty of drug use be separated from the navy and that is what was ordered at Mast. I viewed that as unfortunate but acceptable.

What follows is about the Navy and it applies to all of the cases I know of. It does not apply to the other services at all in so far as I know. I know an Air Force officer that went through NJP 3 times before he was promoted to captain. He failed to zip his jacket precisely 3/4 of the way up and twice had a messy BOQ room. We didn't play that game on the ships at sea.

There is something basic that is lost after a man has been to Mast and found guilty; Trust.

Running around in the Persian Gulf for a year we were always critically undermanned. The navy of the early 80's didn't care. When I say undermanned I mean it. Most watches on the ship underway were stood port and starboard. For engineers watches inport were also port and starboard. That said, when 12 engineers were busted for drug abuse after a month in Pakistan the Chief Engineer was adamant that he would not have them in his engine rooms ever again. He no longer trusted them and in a 600 pound steam propulsion plant one little mistake or failure to do the proper thing could lead to catastrophic damage, death and injury. There was no trust.

Back in the Persian Gulf in the late 80's I had a Commanding Officer who busted a pair of Petty Officers for the alleged crime of sleeping on watch. He didn't consider trust after reducing them in rate, fining their pay and restricting them to the ship. He had not told the Senior Watch Officer that he did not trust them anymore. He did not relieve them of their duties or watch standing requirements.

He saw one the sailors a few hours after Captain's Mast.  The Petty Officer was standing armed topside security watch in Sitrah Anchorage, Bahrain just before Operation Praying Mantis. 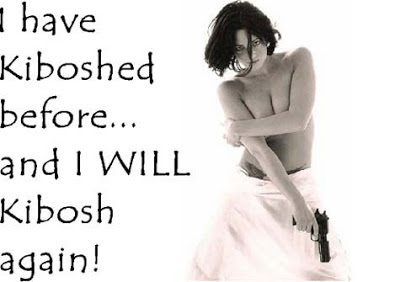 As he said to me a few minutes later, "Jesus Christ, Curt! All I saw was the gun!"

I laughed my head off. Photo courtesy of Sondrakistan.
Posted by HMS Defiant at 11:06 AM