ONE DAY IN MY LIFE 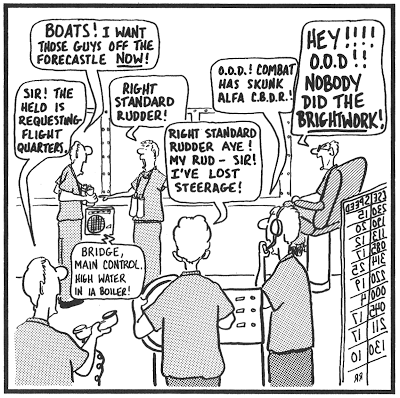 I clipped it out of Navy Times when it appeared over 20 years ago and it adorned my freezer door ever since. I left it behind in San Diego a couple of years ago with all that remained. Jeff Bacon was kind enough to email it to me last night.

They say that a joke should never be explained but this is outside the norm since it's all jargon. The cartoon shows an extremely bad day in the life of a bridge officer. He wants a man off the bow of the ship while the conning officer is ordering the helmsman to steer a new course. The ships helicopter needs the ship to head into the wind in order to land safely while the engine room is reporting that the ship's main propulsion is compromised and with it, perhaps all power and light. The Combat Information Center is reporting that another ship out there is on a constant bearing, decreasing range which translates as, it's going to hit us. Finally, the helmsman reports that he no longer has control of the rudder since the steering machinery has failed. The Commanding Officer's attention though is taken by one really crucial bit of data. Nobody had polished all the little brass cover-plates and handles.

It's a wonderful picture about how some people get totally lost in the minutia.

As Inspector Clouseau would say, "You raving Oriental idiot! There is a time and a place for everything, Cato!"
Posted by HMS Defiant at 6:30 AM