I think everyone involved in promoting, funding, building and maintaining the Littoral Combat ships should be horsewhipped; Repeatedly. They deserve worse.
The U.S. Navy has decommissioned the 2010-built USS Independence (LCS 2), the first Independence variant Littoral Combat Ship. The Independence, which was designed to have a service life of 25 years, is being retired early along with the USS Freedom (LCS 1), the first Freedom variant LCS commissioned in 2008, due to budget constraints related to updating its systems to match other ships in the class. Freedom is due to be decommissioned later this year.

Right up until the end the Admirals push the lie that these ships had a crew of 9 officers and 41 men. In fact, each ship had 2 full crews. One was goofing on for 4-5 months while the other was nursing a crippled, broken, useless piece of junk.

Decades after they were sold to us as the modern replacement for the guided missile frigates they replaced; each of which was fully capable of conducting primary missions of surface warfare, anti-submarine warfare and anti-air warfare, the ships remain utterly useless because they're war fighting components were to be mission modules that would be bolted onto the hull to accomplish a single one of those missions and yet, not one single module has been developed and delivered since they were laid down. Yet we're still building these useless hulls.

They were also supposed to fill the vacuum created by the decommissioning of the Mine Counter Measure ships but that module didn't get built either. That's kind of funny to me because that's a module I deployed to the Red Sea with in 1984 to hunt for mines with special purpose mine hunting helicopters. You'd think somebody would know how to do that but it's the new Navy that designed and built a class of ships to replace real warships that was to fire its long-range guns from over the horizon except it turns out each shell cost more than a Tomahawk missile and was far less dangerous to the enemy.

I think of this era as the handful of years in the first decade of the 19th century when the modern Dreadnoughts were so overwhelmingly dangerous to the pre-dreadnought battleships that they could not stand in the line-of-battle anymore. The pre-dreadnoughts wouldn't ever even get into shooting range of the dreadnoughts and whole navies had to be replaced at inhuman speed. Germany and England did it but the rest of the world's navies were left behind except for one.

The other bit of stupid was at Maine Maritime Museum. Pity about that. We really enjoy that museum. 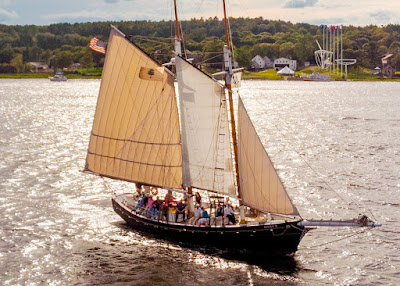 It's last outing was nearly its last. Most sailboats will automatically steer into the wind when the sails are overloaded. That's called rounding up and happens because naval architects always build boats with something called 'weather helm' which means they head into the wind without a firm hand on the wheel/tiller to keep them on course. The other approved method for letting the wind out of the sails is to simply let go the main sheets and let them blow with the wind instead of using it to propel the boat. In this case, either approach would have kept the boat from capsizing.
Posted by HMS Defiant at 3:51 PM