I DON'T THINK THIS IS SATIRE

It is way too close to the truth.

I think there are a lot of police who are getting nervous in the service because this is one of the very rare times that one of them has been held accountable for murdering an innocent person because they can get away with it. I think as we go forward more and more of them will be held to account. That ridiculous and nearly deadly charade of law enforcement when an LA cop ran amok and the rest of the police forces in southern California responded by shooting every pickup truck on the road was a sign that things in police world are out of control.

From the Babylon Bee.

DALLAS, TX—Former police officer Amber Guyger was found guilty of murder today. Many are praising the verdict, saying that Guyger deserved the murder sentence for busting into her neighbor's apartment and shooting him.

But some legal experts say this could set a dangerous precedent of police officers not being allowed to shoot anyone they want.

"Imagine an America where a police officer can't break into your home and just shoot you to death---that's not my America," said one Dallas lawyer. "This is really stoking fears all over the country that we will no longer be able to trust our police officers to kick in the wrong door and shoot us in the face."

He shook his head. "Today, justice has been served---and that's a bad omen for any police officer who may want to one day exercise his right to go into your home and shoot you."

Guyger and her legal counsel relied heavily on the "But I was a cop" argument as well as the "I feared for my life" defense, plus a creative use of the "Did I mention I was a cop?" legal precedent. But shockingly, none of these arguments worked, baffling legal experts and causing many to worry about the future of our justice system.

Spokespeople for the justice system assured Americans the decision was a fluke and that it "won't happen again."

This is the picture at the 'shooting' link. It makes for terrible reading. 2 people out delivering newspapers had the misfortune to appear in front of police officers far more worried about themselves getting home than giving a rat's ass if innocent civilians get to make it home alive. 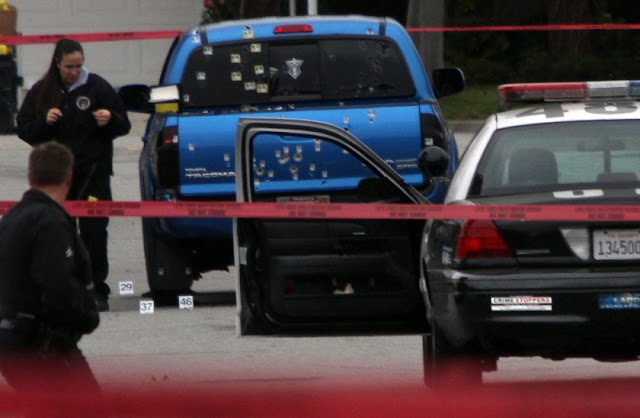 Those cops should still be in jail for attempted murder.
Posted by HMS Defiant at 2:42 AM