I saw a 'journalist' was recently outraged to discover a man using his right to freedom of speech with a T-shirt. The 'journolist' was outraged and his sister was appalled and the press was disgusted and amazed at the chutzpah of some citizen expressing his first amendment rights on an airplane of all things.

Evidently, they saw some guy boarding the 'journolist's' plane wearing one of these. 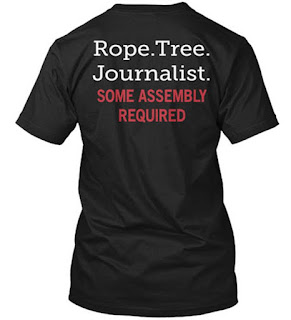 I don't wonder that the bro-sister were shocked at a mere citizen denigrating them and their right to speak out while at the same time condemning his God given right to speak out. There was this guy who put into words what he found unique about Americans. Here it is:

the people can not be all, & always, well informed. the part which is wrong [. . .] will be discontented in proportion to the importance of the facts they misconceive. if they remain quiet under such misconceptions it is a lethargy, the forerunner of death to the public liberty. we have had 13. states independant 11. years. there has been one rebellion. that comes to one rebellion in a century & a half for each state. what country before ever existed a century & half without a rebellion? & what country can preserve it’s liberties if their rulers are not warned from time to time that their people preserve the spirit of resistance? let them take arms. the remedy is to set them right as to facts, pardon & pacify them. what signify a few lives lost in a century or two? the tree of liberty must be refreshed from time to time with the blood of patriots & tyrants. it is it’s natural manure.

You see the dilemma. To speak now in the manner of Thomas Jefferson is to invite a visit from the new red coats and their evil minions. For some reason, those eagerest to squelch your right and my right to free speech are the journalists who believe that only they may speak truth to power.....and even then only when that power wears a Republican hat.
Posted by HMS Defiant at 3:24 PM