The Daily Mail goes all in with fake news as it reports that a liar announced at a journalism drive-by that President Trump told her that he was going to smear journolists every time they lie or make up fake news. In this one article the Daily Mail captures the essence of President Trump's campaign against the liars who make up most of the media today.


What I think the Daily Mail missed and certainly what both Leslie Stahl and Judy Woodruff missed, was that nobody except rabid Trump haters actually believe a word they say about Trump or his administration and we take everything else they say with a very large DOT truckload of salt. They are not just fabulists anymore, they are outright liars and get caught in the act of 'making shite up' practically every time they open their mouths.

Why would President Trump outline his strategy for dealing with liars with one of the liars? If you actually go to the link and read the article you will be struck with how miserable the editing was. It fails any standard of real journalism or professionalism. It's a commentary itself about the parlous state of the news business and I consider the Daily Mail one of two papers worth looking at for news.

I clearly influenced Elon Musk with my comments because he went off today on the media liars. 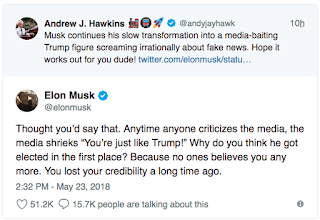 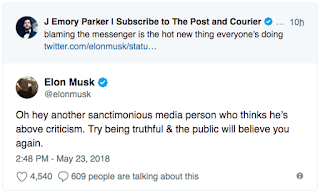 What the journos missed was that the world wide web happened and the sources of news all the way back to the primary source are now available for anybody to peruse or watch and the days of hiding the real news from the proletariat and advancing only the news that benefits their benefactors are over. And no, I'm not talking about 'Infowars' or the wackjob web sites, I'm talking about the real interviews and the real primary sources and facts. These days, the main stream media and PBS/NPR/PRI just embarrass themselves with their flawed non-coverage of the news.
Posted by HMS Defiant at 11:32 AM