IT WAS THE KNIVES

I saw this picture at Daily Time Waster and it brought back a memory of attending the Expeditionary Warfare Conference in Panama City. I was greatly entertained by the Army general from TRADOC who got up and gave his speech while weaving in two or three other threads as he talked about training and doctrine. He babbled on very happily and without any hint of PowerPoint and introduced us to the Chief of Staff Army of the United States, who, after the War Between the States, decided that something had to be done about the multiplicity of knives that the soldiers were forced to carry. 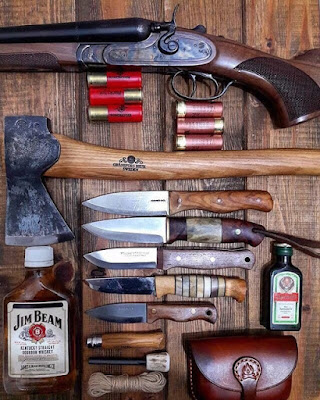 He helpfully listed them: gutting knife, skinning knife, bayonet, hunting knife, hoof knife, oh there were a lot of knives in the Army of 1870, and working with others, he set out to reduce the number to the essential knife.

As a tiny detour he then talked about the wonderful breech loading rifle the Army had just equipped its soldiers with and what a marvel of technology it was. It was new and cool and the Army had perhaps fired as many as 100 rounds out of any of those shiny new rifles when they shipped a load out west to equip General Custer's 7th Cavalry. Everybody was impressed with the shiny new rifle and promptly tossed the old guns.

At this point, he detoured once again and talked about some really smart Germans in 1914 who invented a railroad gun that could shoot up targets over the horizon. The Germans carefully took into account the curvature of the earth, the atmospheric density, the wind and just about every other thing that could turn a ballistic solution into a miss and they even calculated the wear and tear on the bore of the gun and had made precision shells for the gun that would, as the bore wore down, increase in size and so still achieve the precise muzzle velocity that would let them hit targets in France.

Now the general was not anti-technology. That's not TRADOC's job. He just liked history and liked to talk.

The upshot of course is that when Custer and his bit of cavalry got to Wounded Knee and found every single armed indian in the West and started to use those new rifles, they found that the brass shells had a nasty tendency to split which fouled the breech and basically left the cavalrymen with some very expensive clubs. Because, the Army had also come through on the Army Combat Knife which was, as usual, one size fits all and could be used to cook, dig latrines and pick stones out of horse's hoof but which, in the event, was way to big to be used to dig out the little pieces of brass bullet that had been stripped off by the extractor when the guns fired their 101st round and the barrel had heated up and nobody knew the extractor suffered a fatal heat casualty because nobody had test fired the guns until they got that hot because, after all, how many indians could there be?

We were all laughing at this point but, it wasn't really anything to laugh at and those of us who were program managers decided to take another look at what we were building for the fleet or the Army and maybe make sure we weren't repeating an old mistake.

Germany's Prince of somewhere was inspecting the giant gun which was fired twice and he admired how the 1200 men it took to man and fire the gun went about the task with precision. The gun fired two rounds and stopped. The Prince asked the gunnery commander what he hit over the curve of the earth and the German commander was kind of stymied. He had no idea. He knew what they were aiming at but since they could not actually observe the fall of the shot, didn't know if they hit it.

A junior staff officer told the Prince and the general that if he gave him until morning he could tell them where the shells landed. He then got on a bike and cycled a few miles closer to the target city and waited patiently until the French delivered the morning newspapers which went in to some detail about the damage in the city caused by mysterious explosives that appeared to have come out of nowhere.

You know we have now an entire useless class of destroyer. The damned things cost billions of dollars and are practically worthless because they don't do air defense and the amazing scientifical gun they were built to carry costs as much to fire as it costs to open the Stargate. Every round costs as much as an actual Tomahawk missile and so, of course, Congress said it wasn't going to buy any of those things because the Navy would just waste them.

We have an F-35 which is the all-in-one cheapo fighter that was going to replace everything in the air and be cheaper than the ridiculously expensive F-22 which, as you know, actually seems to have come in at about half the fly-away cost of one F-35 but was considered unaffordable at the time.

We really need to take the Department of Defense down to the river and throw in all their current program managers. They can be like our modern version of witches. If any of them float we know they're a witch and we can dry them off and burn them at the metal stakes we'll erect in the Mall.
Posted by HMS Defiant at 6:30 AM
Labels: not viable, shiny, Stupidology