THERE IS A STORY

I used to listen to some of the more junior petty officers at various commands who would sometimes, late at night, bring up the story they heard from a friend who had a friend who served as helmsman on a ship late one night, probably long after midnight while the ship was steaming independently on some nameless ocean in the middle of nowhere and surrounded by nothing at all and the story then took on a departure that is unique to sea stories everywhere for this is, in fact, a genuine, 'no shit'3r'.

He was helmsman and the infant son of Mickety Mouse was the Junior Officer of the Deck and Conning Officer on this destroyer, frigate, minesweeper ship and the helmsman just knew that the pencil necked geek wouldn't notice if he just put on 2 or 3 degrees of constant left or right rudder and made the ship sail in a giant circle all while the ignorant unknowing product of the Severn School for Boys failed to notice because, dark out there and no visible horizon.

Modern sailors probably no longer tell these sorts of stories. Modern US Navy warships are more like women at restaurants powdering their noses at the same time. They don't ever travel alone anymore. Somebody senior has to keep an eye on them or they get up to the damnedest things all unsupervised and left to their own devices. Nope. Never happen today. No way.

Not like this sort of thing which is pretty much a product of all the servcices. The only 'clean' Front Office staff usually has a CWO2/3/4 in charge and they don't usually do crap like this. 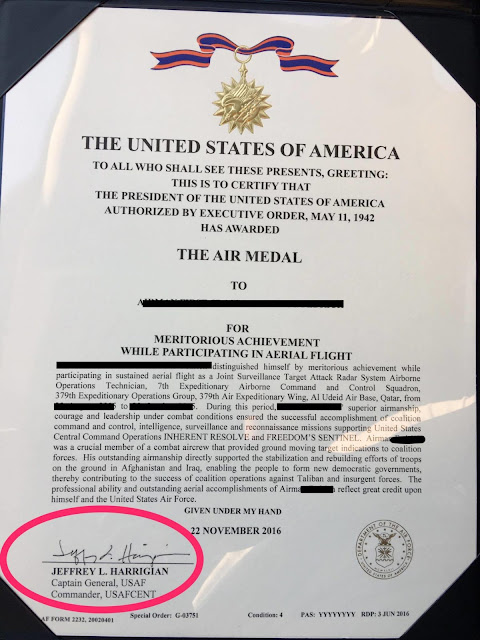 Our man JQP doesn't understand the little things that do motivate the hell out of people at this level of war. If I had such a job as this guy did would I have tried to slip in a Captain General of Air Force? You're damned right I would! And if I got a citation this fuc#ed up you can bet it would be the only one I ever framed and hung on the wall of my office. This is a golden treasure. Somebody appears to have gotten a signature stamp for a 3 star general and used it to good purpose.

I worked again and again and again and again for COMUSNAVCENT. This would not be possible there but I always wondered about our paramilitary on the other side of the causeway at JTF-SWA. Those guys were capable of any kind of lunacy at the drop of a hat and it only got worse when Stormin Norman moved in.