Another good man, one of the rarest, has stepped into the clearing at the end of the path. He was the last man to step foot on the moon when he followed Jack Schmitt into the lunar lander for liftoff and return to earth. I join most of the Americans of my generation who never thought that the last man on the moon would be Cernan in the year 1972. It took years for me to accept that the lightness of being that had one time gripped America had slipped away, almost unnoticed until the Challenger brought the fact home to us all that America had given up on the space race and was no longer interested in pushing out the phyical frontiers. 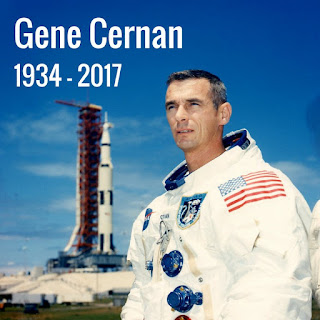 Posted by HMS Defiant at 12:14 AM
Labels: end of the path, Moon shot, News