Harbor View Medical Shaman Pavillion is one of the places I still take an interest in. It is old. It is functionally, obsolete. It's a dump. I've seen better hospitals in villages in south Korea. I went there a few times back when I was young and a pseudo-lawyer of the Navy. It was part of my Judge Advocate General Investigation into a Line-of-Duty-Misconduct investigation. It was one of those things. 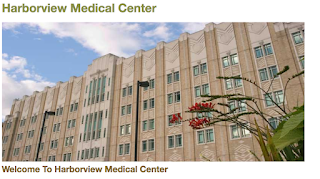 You know, you don't know, you just go and hope for the best.

"Hello", said I to the staff frightful harridan who actually burped at me in response. "I am here to acquire the treatment records of Petty Officer 2X of the United States Navy." In her burp I detected a subtle hint to just FOAD. I was young and persistent. I was escorted out of the Harbor View Medical building by security. I had made a fundamental failure. I told them I was entitled to the treatment records because the organization that sent me to get them had PAID for them.

Security didn't march me all the way to my car, just down the steps into the parking lot with no harbor view at all.

I have to say that my JAGMAN Investigation didn't actually suffer much from the discourteous refusal of Harbor View Medical in Seattle to share with me the records of treatment of an idiot who was so lost to reason after a departmental picnic that he climbed on the hood of his friend's car and 'dared' him  to knock him off because, that sort of thing leaves tangential evidence of full on drunken stupidity, which, in this case had resulted in a very very broken ankle and 5 months removal from service in the afloat part of the navy which he could have survived since we were in drydock at the time in the second worst shipyard in the known universe but, we had, in fact, come to the end of our scheduled 9 month long overhaul in Hell Itself and needed to be seen to get underway, if only to prove that their shoddy repairs hadn't damaged too much of the gas turbine propulsion system.

Hey Buck! I know you're watching. Was that the run-on sentence from hell or what?

Harbor View dragged me through half a dozen administrators before they admitted the impossibility of adding the medical treatment records to my "findings of fact." That was OK. It was almost a complete full day without being in the second worst shipyard in the known universe.

Some days are like that. This one ranked up with the few hours I spent with the Engineering Department Master Chief at the Bahrain Self Defense HQ with the commanding general who leaped to his feet, honored to be visited by the "man who wore the stars" and me, Ensign legal officer. Ok, he was actually way more impressed by Master Chief Meisbrugger. (he was an orphan who had been adopted and taken the name of his adoptive parents. One of the genuine best people on earth as I'm sure his parents were). I was a mere adjunct and "legal officer" was the least of my colateral duties.

Life in the Navy. You know, they keep sacking these captains and even admirals for taking bribes from some dirtbag in 7th Fleet's orbit. Nobody ever offered me any kind of good deal.......except, that one time, in the Seychelles when the XO personally kicked me off the ship and I drove to this fantastic beach hotel (topless french babes on the beach!) and I pulled into the Registration Area in my jeep (and yes, it was, in fact, a drive in registration area)  and this smarmy dude popped to attention by the door to my jeep with a tray over his shoulder and asked me if I would like a complimentary beer of which he had several cold ones on the tray and I looked at him and then into hte backseat of my rental jeep at the 14 cases of beer and boxes of bottled booze and said, "srsly?"

And of course I took one.....for the team.....who was going to show up in an hour or two at the Admin arranged by their very own Mess Treasurer, Postal Officer, Legal Officer, Voting Officer, Auxiliaries Officer.....and so forth and so on.
Posted by HMS Defiant at 6:17 PM