Are there any overt pro-America American groups out there anymore? Everyday I read about another pseudo or quasi American group that isn't really about America and Americans. They seem to have splintered into competing groups of budding little fascists.

I read too much news which is kind of a travesty since I took to reading the news again after I found watching television news unbearable. Now it turns out that even the written news that crosses my eye is so full of irritating things it is best avoided. I wonder how many of us have found ourselves sliding comfortably into home each day without paying the slightest attention to the news of the world, the nation, or the city around us.

I vacationed a time or two in a place which is no more where I was were totally cut off from the outside world. No TV, no radio, no newspapers, no cable, no internet. Oh sure, you could get in your car and drive to Kona but there wasn't much there and the idea of doing it so you could pick up a copy of the New York Times in order to feed your news Jones was too much even for me. Besides, every morning at breakfast we got a 9 page extract of the news from the NYT. I say 9 pages but it was only 8 because the last page was the crossword puzzle. That was enough.

I've about reached that point again. Fortunately, spring is almost here and I will be able to take in the gentle breezes and walks in the woods that make a day a splendid thing. I have also rejoined the life aquatic since I trailered home the latest addition to my fleet. I have to fix the electrics on the trailer and figure out how to make it work with the car and then I'll be able to hit the nearby river and the lakes and find comfort in the fact that Lake Erie is the shallow Great Lake and therefore warms up to practically blood temperature by late June. Yep, easy days and lazy nights.

I'm still writing four or five posts a day but perhaps that will slow down when I stop reading the news. Buck and I used to swap numbers sometimes. Not the unimportant ones, but the ones that showed how much effort we were putting into this trivial thing called blogging. 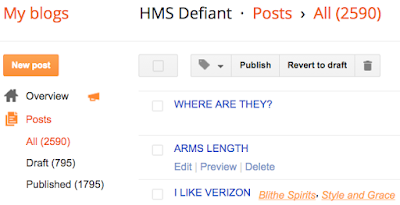 Posted by HMS Defiant at 1:51 AM
Labels: Balance, Blithe Spirits