IT'S NOT A SMALL TOWN

I did end up getting the hair cut yesterday. As I walked in I commented that it was my first entrance without other patrons present in the little 2 chair shop and the owner smiled and said that not only had she managed to finish her lunch undisturbed, she also managed to sweep up. I admired the room and mentioned it was also the first time I'd ever been there without finding myself ankle deep in hair, and then I bravely sat down for the usual.

As I sat there on the receiving end of a very good haircut, I asked if she was going to be at dinner that evening and she was answering when the phone rang with her husband asking her what time they were leaving. I arrived a little early, to shop, and the MC/owner asked me something that got us discussing that my barber would be there that evening. He shook his head and said, "she isn't on the list." I told him I was pretty sure she was going to be there. She's shows up pretty much every month. He went off to call her but it was too late. He set a place for them anyway.

When she showed up, in good time, it turns out that 70% of the men present know her very well since they also get their haircuts in that little shop. Sheeesh! No wonder it's so crowded. These people drive in from all over MetroParkCentralis to get their hair cut at her chopshop where I got this, slightly modified by me, masterpiece. 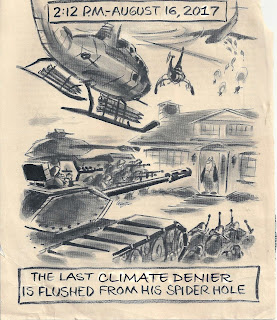 I'd tell you more about the dinner,  but it's a secret.
Posted by HMS Defiant at 2:30 AM
Labels: Blithe Spirits, MetroParkCentralis, working girls