I have to admit I laughed out loud when I started reading about the CO2 gas shortage leading to an immediate and drastic crisis in the United Kingdom. You can find some of the background here. I have excerpted a few funny quotes:

Ministers are desperately trying to persuade the millionaire boss of a US fertiliser firm that produces 60 per cent of the UK's CO2 to restart production.

CF Industries, one of the biggest fertiliser businesses in the world, shut its two plants in Teesside and Cheshire after a large surge in gas prices meant continued production wouldn't be profitable.

"The plants produce 60 per cent of the UK's carbon dioxide with the decision to close them blamed for plunging Britain into a CO2 crisis set to decimate the food industry, leading to animals having to be culled and supermarket shelves being empty."

That's funny right there. The owner shut down production because the idiot government let the price of gas go up just a little bit. 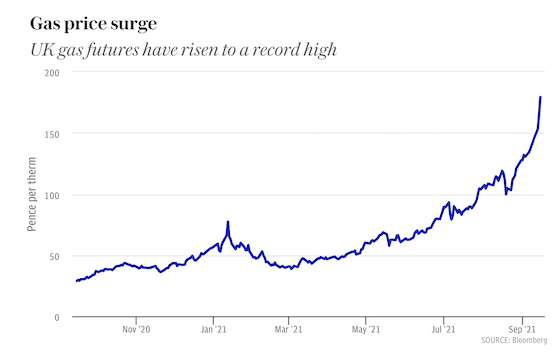 It takes really stupid people to destroy an entire national economy over a completely fake manmade fictional tale of woe. It's not just the British policy elite, we got our own morons in government.

"Business Secretary Kwasi Kwarteng is now holding fresh talks with CF Industries millionaire chief executive Tony Will, 55, in an attempt to persuade him to restart production.

Mr Kwarteng says No10 is considering 'temporarily' subsidising the company to get CO2 production back up and is 'very hopeful' a deal can be done soon.

However, he admitted 'it may come at some cost' after Mr Will is thought to have been unconvinced by the government's offers at an initial meeting on Sunday.

News that CF Industries controls so much of the UK's CO2 supply has prompted fury and disbelief from food industry bosses.

Richard Walker, managing director of Iceland, said yesterday: 'The thing that has shocked me is that 60% of [CO2] production is concentrated in two factories which are both owned by a foreign business.

'This is something that's clearly critical to national security - not just food but also healthcare as well. So it seems quite perplexing that it's at the whim of a private enterprise in terms of whether it's profitable or not and therefore whether they produce the stuff or not.'"

If the ministers were serious about getting the business restarted during the cost crisis all they have to do is offer the company energy at exactly the price it was before it went all pear shaped. I can't imagine any businessman turning that kind of offer down and it's fascinating that in this case, as in most others, the national authority can no longer appeal to the patriotism of the business class since they are rarely patriotic these days and with little reason to be so.
Posted by HMS Defiant at 1:37 PM