I liked this book when I read it and enjoy it just as much when I reread it.

"Perhaps the most macabre touch during the long trip was the “casualty pool.” For a five-rand bet, troopers pulled out numbers ranging from 0 percent to 100 percent. On the return trip, half the pot would go to the soldier whose number most closely approximated the percentage of casualties suffered during the operation; the remainder would go to charity.

A hulking farmer’s son in the Iceman’s Support Group, Superior Private Kobus Nicodemus, drew the ticket that equated to 100 percent casualties and observed, “Now I know what they mean by mixed feelings.”"

This came to me as I was looking at a picture of Austin Bay's input to Instapundit. 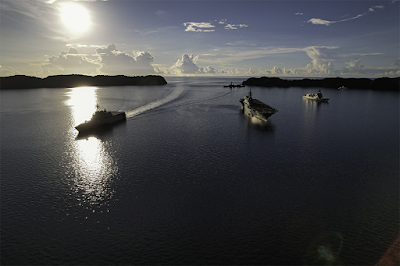 It is the highlight on a naval officer's career to command. As I look at the picture and imagine the life as CO of one of the LCS I imagine they view their lot much the way Superior Private Nicodemus did in the paragraph I quoted. Yay me! Selected for Commander Command! Oh woe, I get to command a little crappy ship instead of a guided missile destroyer like my peers. I think at that point you could say that your position has been established. It will be the guys that drew the DDG commands that go on to make captain and flag officer.

This then reminds me of a chat I had with the commanding officer of the Naval Brig at Miramar. He was a nice Marine lieutenant colonel who had gone through the same mood swing when he was selected for command. As he said, he thought he'd get an F-18 squadron command as a result. He didn't even know that the brig counted as a command. It does, along the same lines as command of USS Constitution.

Mixed feelings. I'm glad I dodged that bullet. As I came home today from the university I was struck by how the democrats pulled the same trick on the electorate with Biden that they did with Obama. They picked a complete buffoon and imbecile as their VP so the incumbent president would be bullet proof against impeachment. Obama got slow Joe and we got Harris. Isn't it odd how the candidate of fear and trepidation that was to limit attempts to oust Obama has ended up as the figurehead of his party and the country and has found someone even more awful and incompetent to be his #2?

To get rid of Biden we are forced to accept Harris as president.
Posted by HMS Defiant at 12:11 PM