THE LEFT'S WAR ON REALITY

I have taken recently to saving pdfs of some news files. There is a reason for this of course. It has to do with now realizing that the Left cannot help itself and some left wing social justice thug is always out there spilling the beans and laying out the left's plans to kill your right to speech, seize your guns, ban the sale of ammunition and destroy equal treatment for all under the law. It's also fun to mock them with their own words and deeds and they so often trumpet aloud how delighted they are to see other people thrown under the bus of social justice and 'equitable' treatment under the law. At any rate, Forbes screwed up somehow and actually published an interesting article that they quickly shoved down the memory hole and hope to make go away.

Here is the offending document 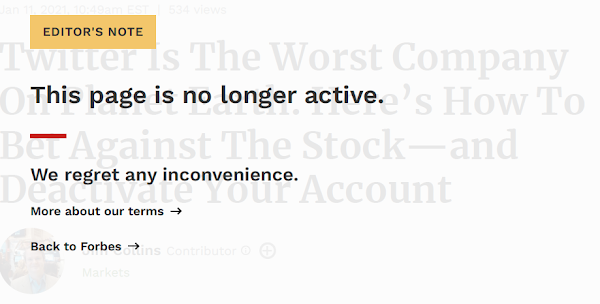 Naturally they failed to eliminate the document since the internet is forever until the world converts entirely to wholly natural ecologically sustainable unrealistc power at which point the servers will all be offline; starved of power and air-conditioning. Until then, we can still keep the parts of the left being sacrified in the dark alive by making copies and thrusting them back into the market place of ideas. The article starts out fairly simply. See for yourself how Jim Collins begins:

It is rare a that a public company stretches so far into the realm of abhorrent behavior, but Twitter's TWTR -2.1% actions last week revulsed me more than Union Carbide’s Bhopal, Boeing's BA -0.3% repeated failures with the 787 Max, J&J’s JILL +3.5% Tylenol scandal and really any other corporate action I have seen in my lifetime.

For a social media platform to censor a world leader—while still giving a voice to preachers of hate like Louis Farrakhan Iran's Ayatollah Khamenei and even O.J. Simpson—isn’t just wrong from a free speech perspective, it's actually terrible business. So, Twitter has shown little to no sequential growth in its user base of late (details below) but it is still valued like its Big Tech growth-y brethren. Twitter is not growing, it is shrinking, if measured versus the growth rate of the global economy, and that reduction will accelerate dramatically now that Twitter has offended every Conservative in America with its action to ban President Trump. Only fools in Congress and Big Tech apologists would think that Section 230 of the Communications Decency Act should apply to Twitter. It is a publisher, not a platform. Full stop.

So, first and foremost, here is how to deactivate your Twitter account. I used this excellent article from the Today show last week to kill my account. It took me more than half an hour, and making it difficult to leave is a classic Big Tech strategy for bolstering user numbers, but eventually I succeeded. It was worth it. I will never use that platform again.

But I do stocks, not activism, and even if a new type of conscious capitalism is my investment strategy for 2021, I still need to make some money. Twitter shares are plunging 7% in pre-market trading Monday, and the market will soon realize that this platform is going to shrink dramatically. Even on a good day, Twitter is a cesspool of hate speech, lies (including investment advice) and a “trending" algorithm that seems to have a remarkably consistent left-wing bias. I will not be the last person to cancel it. MORE

I checked Forbes home page and sure enough it shows that Jim Collins latest column is dated 22 December 2020 and not 11 January 2021. 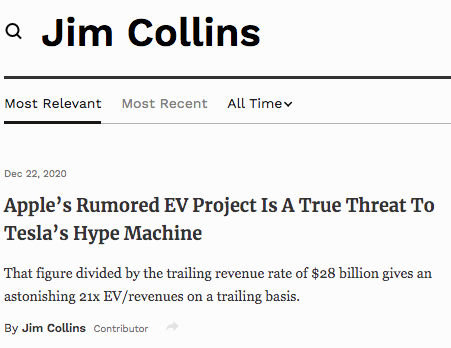 It has well and truly been stuffed down the Forbes memory hole.

It is the sheer hypocrisy that bothers me the most. All the ratbags baying for blood and for Cruz and Hawley to resign their Senate seats and declaring the idiotic assault on the capital building the worst day in history don't appear to even be aware that they've reached the level of madness associated with the kind of people that were stuffed into Bedlam as quickly as they could be rounded up. Authors shrieking for Andy Ngo to be censored and demanding the book stores stop selling his book about anti-fa and the endless every night riots in Portland and Seattle make my teeth itch. Something has to be done.

It is gratifying to see that Jim Collins is a man of his word and he no longer exists on Twitter. It is probably time for every right thinking person to consider if they need to be on twitter. I'm tempted sometimes to get an account simply because it is a true eye into the minds of the deranged socialists and communists educators and politicans who simply cannot keep themselves from posting their every simple-minded idiotic thought using it but I worry that I might fall into the abyss myself. I think I'll stick with blogging.
Posted by HMS Defiant at 3:47 PM