RIOTS FOR THEE BUT NOT FOR ME

I'm really tired of the left and their voices of sage denial of every American's rights as written in our Constitution. The latest bit to ire me comes from a former WSJ military columnist for 17 years named Ricks and it was his tweets that really inspire outrage. 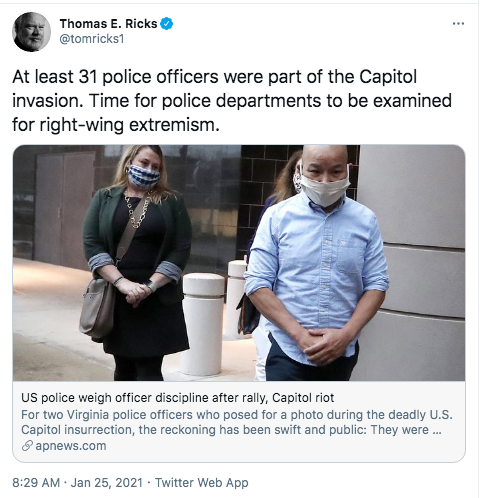 When did the police and the military surrender their rights under the Constitution to protest the actions of their government? Just why is such protests by them condemned as right wing extremism when the media utterly fails to condemn the vicious tyrannical violence of the extreme left wing that is so beloved by all mainstream media shills and every single Democratic government official from the President on down?

I don't understand why the media's altogether imbecility in calling this an insurrection and deadly when it was a cop who shot a harmless unarmed rioter entering through a broken window and the other 4 people died from medical complications brought about by exercising their right to attend a rally to protest the theft of the election and had nothing to do with the break in at the capital or with Trump calling for any kind of insurrection or attack on government. The liars need to be called out every single time they lie.

It's also the time to end the drivel and lie that these morons always recite as they do something they know will gut the country or an institution with their stupid proclamation/justification, that "America’s strength is found in its diversity." If that is so, prove it. All I see is one institution after another torn apart by that idiotic belief.
Posted by HMS Defiant at 6:22 PM