Used to be there were just strange happenings at the Circle K but things seem to have taken a turn for the worse. Now we have them busting out all over in Washington, DC, Washington, Oregon, Michigan, Wisconsin, Georgia, et al. This was the latest at Instapundit. I find it very peculiar. 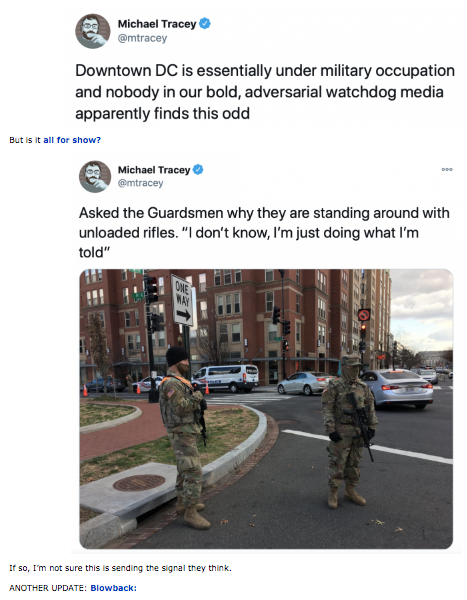 Back when I was the Weapons Officer in one of the Navy's Mobile Security Units we had to follow the rules. One of the most important rules was that we did not put automatic weapons into the hands of untrained people and we didn't let them wander around without some means of providing adquate security for the actual weapons. So, you can imagine my surprise that the Army has detailed soldiers to one of the most dangerous cities in America and issued them unloaded weapons so the men and women can stand around cluelessly in the middle of riot season (never seems to end these days) while attractively adorned with a highly desirable M16 that is essentially any criminal's for the taking. That doesn't sound very smart.

The foolishness does not end with the Army and the state governors feeding troops into the empty and deserted nation's capital. No, there's more. 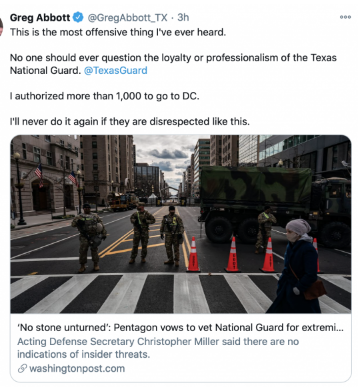 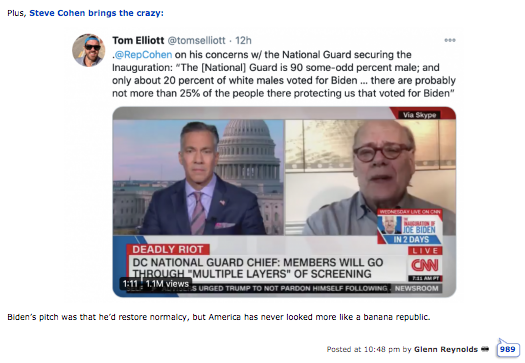 It doesn't seem to dawn on the dimwits that if 80% of the National Guard is white guys and thus 'the Guard doesn't look like America' it might have something to do with the unfailing failure of the dimwits and loser progrs and liberals to volunteer to serve their country. The Guard doesn't just invade other countries, it also responds to disasters and emergencies all over the United States and the world. Why aren't there more of the dimwits in the Armed Forces? I mean, I know what the answer is but the lackwits in the media don't seem to get it.

Kurt Schlichter made an excellent point in his article today. Why do we see pictures of the Guard sleeping rough on marble floors in the Capital? Did their officers fail to provide shelter for them and let's be honest, shelter in the national capital would at least include cots and sleeping bags.

Today I have an appointment to give blood to the Red Cross so at least when the shooting starts and the blood starts to flow I'll be able to say I did my part.
Posted by HMS Defiant at 12:19 AM