RETURN OF THE UNDERGROUND RAILROAD

Rhode Island Governor forbids entry of NY state slaves. She orders the State Police to bar entry to all cars with New York plates attempting to enter Rhode Island or, as it's officially known,"State of Rhode Island and Providence Plantations." I guess you could say it's the opposite of the Underground Railroad, it's more like the Fugitive Slave Act of 1850 which sent those seeking freedom in the north back to the slave states they came from. Kind of speaks well of both Rhode Island and New York state now doesn't it?

The 20th century version of the fugitive slave act appears to be under consideration by a number of other states within the Republic. Rhode Island is of course, just about the bluest state in the Federal Republic and has no problem enforcing the laws of the Great Compromise of 1850. Nobody much likes New Yorkers anyway.

Don't worry slaves of NY! There is a way out and you don't need Snake Plissken to save you either! You throw your favorite possessions in your car, arm yourself, break through the barricades being set up to keep you out of the Hamptons and Long Island and head for Montauk where smugglers left over from running rum to Rhode Island during Prohibition will be standing by off the coast to whisk you to Newport, RI where you can catch a bus or some other form of public transportation off Aquidneck Island unless you merely need to take up residence in your second palace in Newport. See map for details.

It's possible you could also find refuge in Block Island or join our former first family at their estate in Martha's Vineyard. All options are available. Call 1 800-SMUGGLE for details. 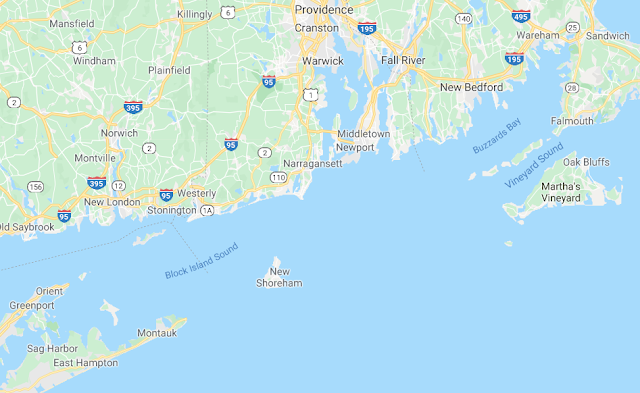