BLACK NAILS IT AS TREASON

The wheels on the tumbrell are finally coming off. It's about time and it's also about time to hang shits at FBI, DOJ, CIA and NSA who pushed this lie on us for 2 years. They didn't misunderstand or get misled, they lied and lied and lied again. Clapper and Hayden should get a short drop but then, so should all of them and since the wheels came off maybe they should be hitched to a bumper and dragged to Philadelphia.


The most immense and dangerous public scandal in American history is finally cracking open like a ripe pomegranate. The broad swath of the Trump-hating press that has participated in what has amounted to an unconstitutional attempt to overthrow the government are reduced to reporting the events and revelations of the scandal in which they have been complicit, in a po-faced ho-hum manner to impart to the misinformed public that this is as routine as stock market fluctuations or the burning of an American flag in Tehran. 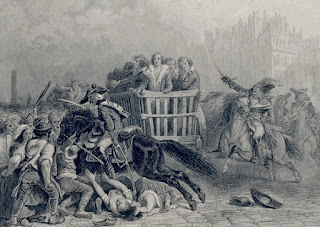 For more than two years, the United States and the world have had two competing narratives: that an elected president of the United States was a Russian agent whom the Kremlin helped elect; and its rival narrative that senior officials of the Justice Department, FBI, CIA, and other national intelligence organizations had repeatedly lied under oath, misinformed federal officials, and meddled in partisan political matters illegally and unconstitutionally and had effectively tried to influence the outcome of a presidential election, and then undo its result by falsely propagating the first narrative. It is now obvious and indisputable that the second narrative is the correct one.

The authors, accomplices, and dupes of this attempted overthrow of constitutional government are now well along in reciting their misconduct without embarrassment or remorse because — in fired FBI Director James Comey’s formulation — a “higher duty” than the oath they swore to uphold the Constitution compelled them. Or — in fired FBI Deputy Director Andrew McCabe’s words — “the threat” was too great. Nevermind that the nature of “the threat” was that the people might elect someone he and Mr. Comey disapproved of as president, and that that person might actually serve his term, as elected.