TRUTH IN THE WORDS

The words are from a splash of truth found at Breitbart in an article detailing some of the lengths to which some people of the right went in order to foil the idiotic protest of the Trump haters. I used to think that Bush Derangement Syndrome would/could never be matched and yet these new haters proved me wrong.


“But he is protesting a man that has traded a lavish billionaire lifestyle to try and fix the train wreck that has been building over the last 16 years. Just to have his whole family ridiculed. Made fun of. Called liars. Racists.” 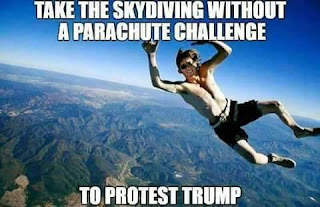 When you look at President Trump in that light it's not hard to see why he really enjoys taking the time to mock the pathetic losers and shoot rockets up their asses with his tweets. He has it on solid evidence that doing this can make the heads of those haters literally explode. God only knows how many have stroked out or died of hate-fueled heart attacks in reaction to President Trump gently letting them know what contemptible little rats they are. 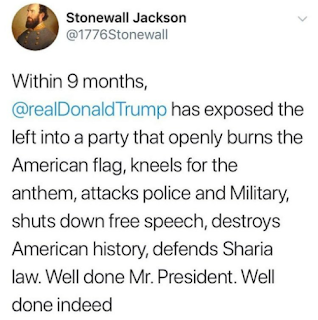 I have enjoyed President Trump's tussling with the usual crew of incompetents and idiots who let Jimmy Carter dictate our strategic policy and sent him to North Korea "to negotiate" a final solution to the issue of Nork nuclear weapons. I admire Trump for probably ordering the SS to shoot Carter if he gets on any international flight and revoked his passport in order to keep that simple chump from jetting off to Pyongyang and patting the newest ruler of the People's Democratic Republic of Korea on the head for cheerfully accepting $5,000,000,000 in direct cash assistance from us for a promise to do a better job of concealing his weapons of mass destruction programs and not letting the idiots at the New York Times find out that Carter's fumbling ambitions have once again resulted in a strategic catastrophe on a par with the Fall of the Shah and the Rise of Islamic Fascist State of Iran.
Posted by HMS Defiant at 6:00 AM
Labels: Blithe Spirits, Voodoo and Legend, war