I was listening to Socialist People's Radio (NPR) this afternoon and listened to a pair of smarmy lickspittles discussing the issue of Russia's intermediate range nuclear missile deployments. These weapons were banned by the Reagan administrations negotiations and treaty with the USSR in 1987.

The treaty gave both parties the right to conduct inspections of just about any site where ground launched cruise missiles or intermediate range ballistic missiles were produced. That gave the Soviets and Russians the right to enter my classified workspace and search around for anything that might look like a Transporter Erector Launcher TEL since the Air Force and General Dynamics used to build those at Air Force Plant 19 in Old Town, San Diego at what used to be the Consolidated Vultee production facility and is now home to the Space and Naval Warfare Systems Command. We were admonished to keep all of our secrets in spaces smaller than the footprint of the old TELs so the Russians could be barred from searching anything or space smaller than an actual TEL. 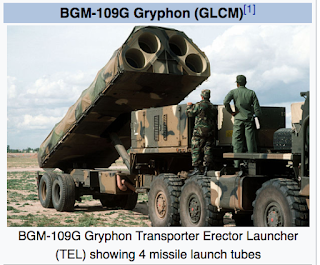 The National People's Radio discussed Trump's flailing Russian policy with the lickspittle commenter noting for us that Trump had no Russian policy and probably wouldn't until he got around to filling the National Security Advisor position and the Deputy Undersecretary of Defense (Policy) jobs and got some Deputy Secretary at State that could comprehend Russia.

What I despise about NPR is that they cherry pick 100% of their guests to follow the liberal chains of thought on all policy or topics and never give so much of a hint about what is really going on by asking some actual spokesperson from the non-liberal half of the country to come on and comment. The lickspittle guest did observe that Russia violated the INF treaty in 2014 during Obama's administration but offered no hint as to what measures Obama adopted to challenge or counter this violation and the NPR lickspittle naturally let him off the hook and didn't ask any of the obvious questions that immediately occur to anybody with a functioning brain.

It's pretty sad. I used to be able (many years ago) to listen to NPR for up to an hour at a time. These days it's down to about 1 minute/day. Oh well, MetroParkCentralis has some excellent music stations.