I am always amazed that the real stormtroopers in America think they're fighting fascism. Their "educators" have a lot to answer for. Srsly, a man is asked to come and deliver a speech and the stormtroopers respond by setting fires and threatening any who atttend to the point: 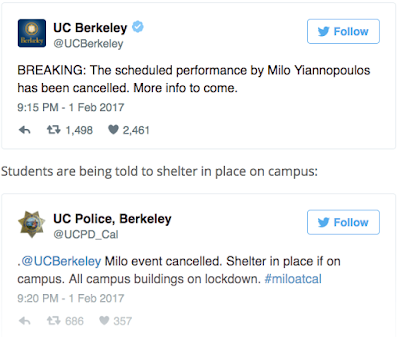 All campus buildings at UC Berkeley on lockdown? It is past time for all students to post a performance bond that they forfeit if they are identified as rioting anywhere during their tenure at the school. There is no excuse for rioting, burning cars, setting fires to building and attacking people who were simply trying to enjoy their constitutional rights. The funny thing though, is that not one single one of these morons who wear black and conceal their faces, ever appreciates that all they're doing is building support for Trump.

I am reminded that the police do not protect the innocent, they protect the guilty. Otherwise those fascist little bastards would be strung up like their moral leaders Mussolini, Hitler and Ceausescu. Only the left seems to  hunt in packs and get away with murder, arson, vandalism and assault and they're always the first to call anyone who opposes their stupid ideas, Hitler.
Posted by HMS Defiant at 11:15 PM