HONEY BADGER IN THE PRESS ROOM

I had to laugh when I saw this from The Babylon Bee. 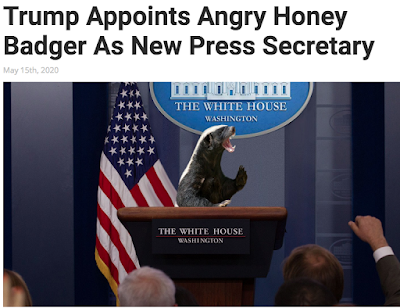 What makes it hilarious is that the White House correspondents shower have been moaning and complaining for months that they no longer get fed the news by the press secretary but have to hear it from the President himself during his scores of unscripted free-for-all impromptu press conferences and no longer had the chance to snipe at the press secretary who they have long believed lives in fear of them. Yes, very funny.

She started stripping them of their faux dignity and upright moral posture the moment she stepped into the room. Losers.

They literally had no idea that she is about 40 times smarter than all of them put together.
Posted by HMS Defiant at 6:00 AM