Brutal day. I called my x yesterday and got the most pathetic peep out of my daughter as her mother loathed me over the phone, long distance, like she does. I hung up and I went for a walk, very worried about a little girl who lives very far away. I was heading to the local coffee shop which is about a mile away and it's just an easy stroll through the neighborhood and I walked by this church. 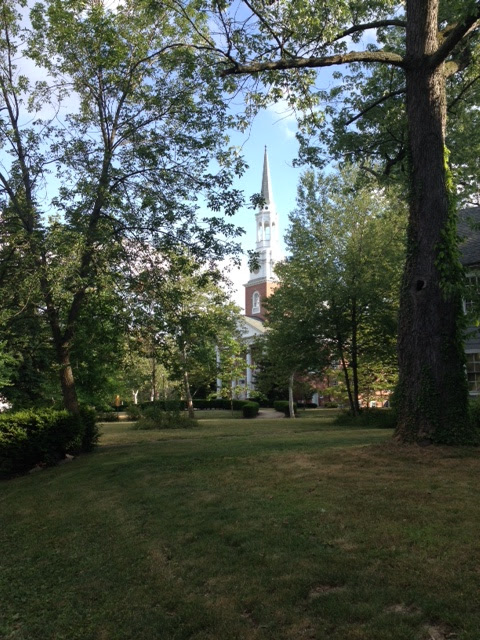 It's where we go to practice Tai Chi. It also happens to be the church of a fellow barberian who gets his hair cut in the same little shop that everybody in Cleveland uses to get a haircut. That's where I met him the first time. I knew the name of the deputy second under assistant minister and I thought he might be able to provide me with the name of a worthy lawyer who would be good for a child custody battle.

I caught him at an auspicious time. His girl Friday (as I think about it, his wife)  showed me to his office where he was busy packing up things into boxes but he graciously made time for me and we chatted. I told him what I wanted which was no more than the names of any lawyers he thought might help me and he then told me that he was packing to leave. After 7 years in MetroParkCentralis he had come to an end and had his own ministry. He was heading west to take charge of a church which is just about a mile away from my daughter's house in Portland 2500 miles away. He will be there next week. We talked.

I don't go to church.

My daughter is in the 7th grade. For some reason, that calls to mind this wonderful lady who was the very first person I ever worked for. I was in the 7th grade and I 'helped' her in the library when I was not in class. She gave me a complete first day cover envelope and commissioning package from the commissioning of USS NIMITZ. I kept it pristine, still in the original package right up until I gave it all to Chaplain Harvey. As with Mike Lemieux, I wish that I had followed my friends a little closer. I had no idea that the oldest child of Chester Nimitz passed away in 2015. That's just a breath away in time.
Posted by HMS Defiant at 4:17 AM
Labels: Blithe Spirits, kids, Letters to my daughter