I am not a simple man but I can easily tell a hawk from a handbill. There is no justification on earth for all these banks and Wall Street Investment firms to pay Hillary Clinton up to $600,000 to come and regale them with a canned speech she's repeated a hundred times unless, they are paying her some quid for her pro. 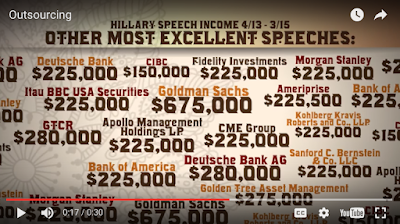 Decent (ish) politicians don't start taking cash from corporate ghouls until after they've retired and then they hit the speech and pundit circuit. Hillary couldn't wait.

She didn't want to appear cheap though so she charges through the nose for people to hear her classified speeches. It's funny though isn't it? The transcripts of her actual speeches to these groups is more closely and jealously guarded then her top secret special access program emails. In fact, the transcripts are as closely guarded and locked away as Obama's college transcripts or his birth certificate.

What is it with democrats that they can hide anything they want and absolutely nobody can dig it up? Sheesh, with the press filled with Dan Rather types, nobody ever finds out nothin about anything if it involves a democratic pol but they can 'find' George Bush's fitness reports from 1970 even if they have to fake them in order to make them news.
Posted by HMS Defiant at 2:08 PM