If you are not familiar with IceCap Asset Management, their newsletter for August makes fascinating reading. I was struck by their observation on Greece. 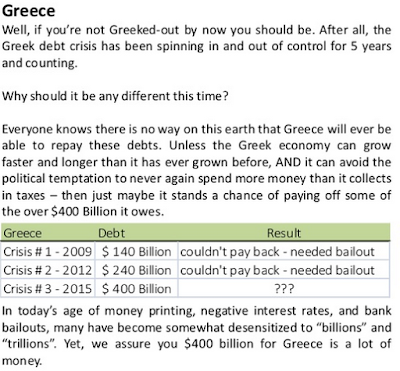 As they go on to note, there is no way on earth that Greece can repay the loans it keeps taking from the EU, IMF and Central Banks. Even if they did raise taxes, cut spending and start paying back the principle it still cannot be done.

For an interesting counterexample, they follow this up with how Iceland handled the 2008 financial devastation by defaulting and throwing bankers in jail. Oddly enough, Iceland is back to within 3% of its GDP before the 2008 collapse while Greece is another 33% in the hole after taking loans from everybody in an attempt to ward off accountability.

People who have knocked Farage et al for their continued doomsaying about the EU gloss over the fact that he is right and that all that has happened since 2008 is a series of frantic efforts to paper over the obvious fact that the EU is broken at a fundamental level. Of course, one can say that about our Congress and government.

When there is no more money the answer is not to spend more money.
Posted by HMS Defiant at 11:01 AM
Labels: bore-sighted on the future, News, not viable, Stupidology