There's a nice page up at Drudge which pretty much captures the entire round of Hillary Clinton's life. 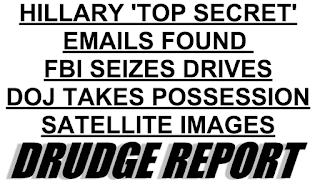 You see how Clinton denied for months and months that there was anything wrong with having an illegal email account used to conduct business as Secretary of State and then claimed that all relevant emails had been turned over to the State Department who has reported themselves as having some trouble winnowing through the emails because they had to ensure that none were classified before release in accordance with a federal judge's order. Their months long process is one that would take me about one month to go through and determine classification before releasing all the unclassified ones and then recommending that Clinton and her top aides be charged with serious breaches of national security along the lines of Pollard or, if you prefer, Petraeus after showing that they had failed to protect national security information.

The next part merely shows how Clintons have operated ever since the TravelGate days, the Rose Law Files days, the Vince Foster execution days, well, I could go on and on and on. The FBI seizes the evidence and while they used to be a fine law enforcement and investigation outfit I'm sure none of think very highly of them anymore. They tend to string out an investigation for 15 or 20 years when it involves politics unless it is a Republican.

The true kiss of death for any Clinton investigation lies where it has always lied and as shown with countless Obama/Clinton scandals over the last 7 years, proven that it simply throws all evidence into a blackhole from which nothing ever comes out. The Department of Justice is the Praetorian Guard of all accused democrats and simply ignores any and all objections to its non-handling or failure to investigate cases that a 12 year old could solve given their resources.

Will nobody rid us of these indolent, useless, counterproductive bureaucrats? That's your cue Congress. You are the ones in charge of oversight and control the funding and the laws of the land and you stopped doing your actual job back in the 1960s. Stop bleating about Inspector Generals or give the ones selected by you the authority to simply relieve and remove officials that fail to comply with the law of the land.
Posted by HMS Defiant at 3:41 PM
Labels: contempt, Palace News, scum