MY OLD HOME IN FORT RILEY

We stopped at Fort Riley to spend the night. I lived there once but never went back until this trip. My father was the Battalion Commander of the 1st of the 7th Field Artillery. He told me a funny story a couple of years ago from when he was at a BBQ at a close friend's home a couple of months earlier. The friend had been the First Infantry Division Artillery Commander.  My father retired 30 years ago from the Army as a Brigadier General. Anyway, he was at this BBQ and he was talking about this house 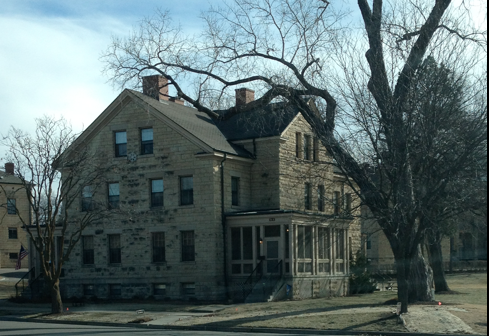 It was a great house. But it wasn't on Colonel's row or on Artillery Parade. It was a lonely little house that occupied a little triangle of land next to the Hippodrome and the Football Pitch. While my father was talking about living in this fine house, the Chief of Staff of 1ID happened to be in earshot and told my father that he shouldn't worry, there was always a chance for promotion in the Army.

I remember when my father got word of his promotion to Colonel. It came in Newport, Rhode Island and it was accompanied by his orders to his next assignment. The houses in Newport were even cooler than the house in Fort Riley. What came next was Huntsville.
Posted by HMS Defiant at 11:40 PM
Labels: Letters to my daughter